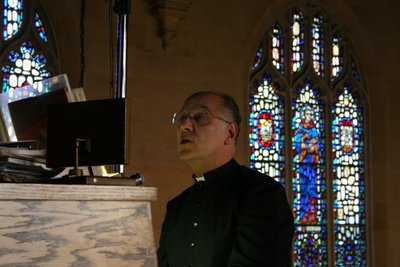 Assumption Grotto's pastor, Fr. Eduard Perrone, playing the closing hymn in the choir loft: O Come all ye Faithful. His first passion is visibly all that is the priesthood, but his second is music, and in particular, sacred music. Father wears many hats at Assumption Grotto, which includes that of conductor.

Fr. Perrone looks into a mirror on the organ to see where all are at as he plays. I wonder how often he must renew his license to drive. 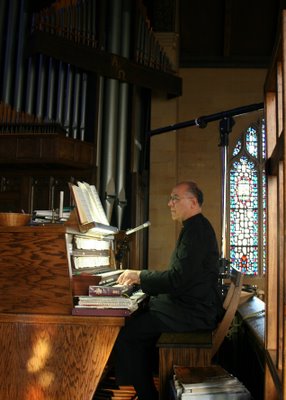 Clicking on any photo should enlarge it on your screen. A careful look at this photo will reveal that Abp. Burke is blessing the two sisters of the Missionaries of Charity who were in attendance. Only one is seen from behind in the right-hand side of the photo. The sisters have a mission in another part of Detroit, but are often seen at events at Assumption Grotto, in particular solemn things like Corpus Christi (scroll down in the link to see more photos of the Missionaries of Charity). 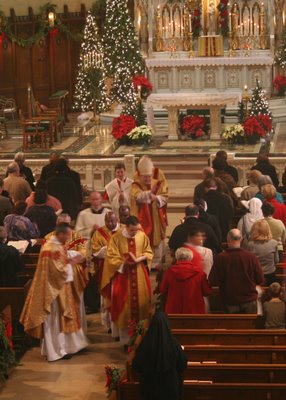 About 10 minutes after Mass ended, most had headed over to the school gym for lunch, but a few remained behind in thanksgiving. As I left the choir loft and headed along the corridor, something caught my eye: Incense still lurking in the Church, as I so often see and smell, but this time visibly caught in the noon sun's rays as they broke through the stained-glass windows.

No one can accuse us of being cheap with incense at Assumption Grotto! Here's proof-positive! 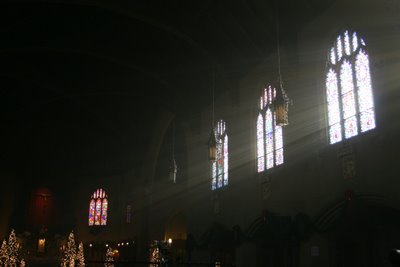 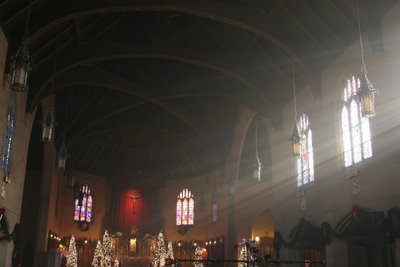 God-willing, I will bring photos from the lunch tomorrow or in the next couple of days, where Abp Burke discussed the Shrine of Our Lady of Guadalupe in LaCrosse, Wisconsin. I have requested a copy of a video by Archbishop Burke about this shrine, shown to us during lunch. It was an excellent overview of this project - its status, it's aim, and it's needs.

Things have been very difficult in my family throughout these last two weeks. Both my mother and sister are in poor health at the moment and my sister is still in the hospital fighting a post-surgical infection (stemming from successful cancer surgery on Halloween!!!). Any prayers for them would be appreciated. With other obligations, I will be likely taking "blogger breaks" in coming days before continuing with coverage of Archbishop Burke's visit to Detroit to remember Fr. John A. Hardon, S.J. I have a beautiful portrait shot of Archbishop Burke during his afternoon talk in the Church during Exposition that will be among the last I share as it was taken at the end of the day.

Posted by Diane Korzeniewski at 6:04 AM