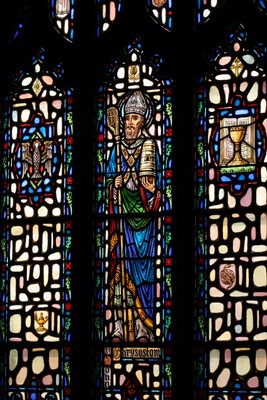 The stained-glass window in Assumption Grotto of St. John Chrysostom

Following the most sacred of moments in the Catholic Mass: The elevation of the Body, and the Blood of Jesus Christ.

Christ instituted the sacrifice of the clean oblation in the Last Supper:

"Then he took a loaf of bread, and when he had given thanks, he broke it and gave it to them, saying, This is my body, which is given for you. Do this in remembrance of me. And he did the same with the cup after supper, saying, This cup that is poured out for you is the new covenant in my blood" (St. Luke 22, 19). (source) 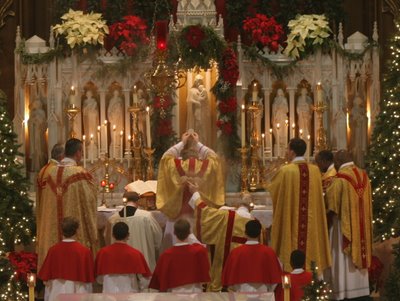 This bread and wine would also be a spiritual food, as insinuated by Our Lord’s words to the Jews in St. John 6, 51-60:

"...the bread that I will give for the life of the world is my flesh. The Jews then disputed among themselves, saying, How can this man give us his flesh to eat? So Jesus said to them, Very truly, I tell you, unless you eat the flesh of the Son of Man and drink his blood, you have no life in you...for my flesh is true food and my blood is true drink...When many of his disciples heard it, they said, This teaching is difficult; who can accept it?" 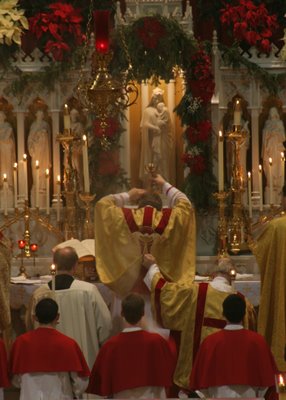 Since Pentecost, the Church has in the Mass carried out Christ’s words "Do this in remembrance of me" in Her daily worship:

"They devoted themselves to the apostles' teaching and fellowship, to the breaking of bread and the prayers" (Acts 2, 42);
"Day by day, as they spent much time together in the temple, they broke bread at home and ate their food with glad and generous hearts" (Acts 2, 46);
"The cup of blessing that we bless, is it not a sharing in the blood of Christ? The bread that we break, is it not a sharing in the body of Christ?" (1 Cor. 10, 16);
"For as often as you eat this bread and drink the cup, you proclaim the Lord's death until he comes" (1 Cor. 11, 26); 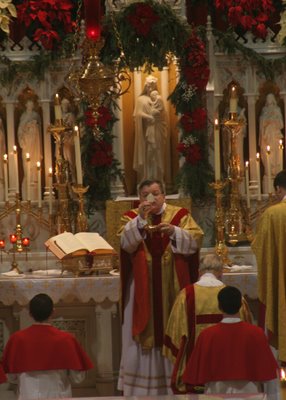 Posted by Diane Korzeniewski at 4:51 AM