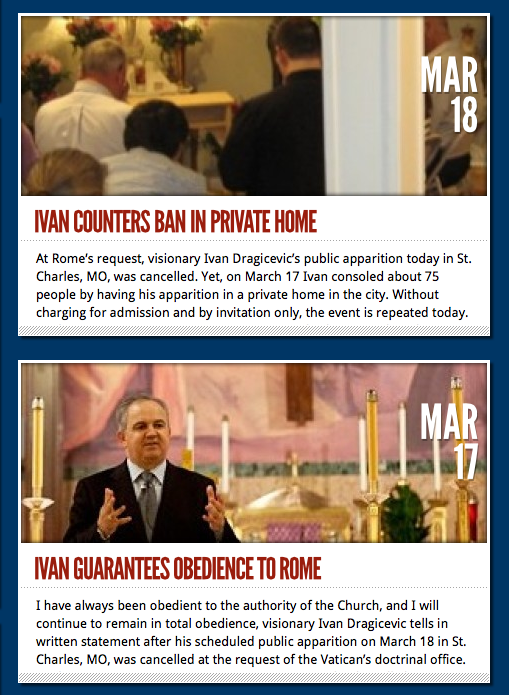 
I don't know how to reconcile the two headlines at the website of Medjugorje Today .  The image above is a snapshot cropped from their homepage at the time of this post the night of March 19th (note the first post is at the bottom for March 17, and the one on top come second).  I could not read past the synopsis provided for each because that requires a $19 per month subscription - more than you would pay for access to some daily newspapers online.

This thread was on their Facebook page, giving further proof that it was a publicly held event, promoting the alleged apparitions of Medjugorje, in a private residence.  That's the only thing that is private - the house. 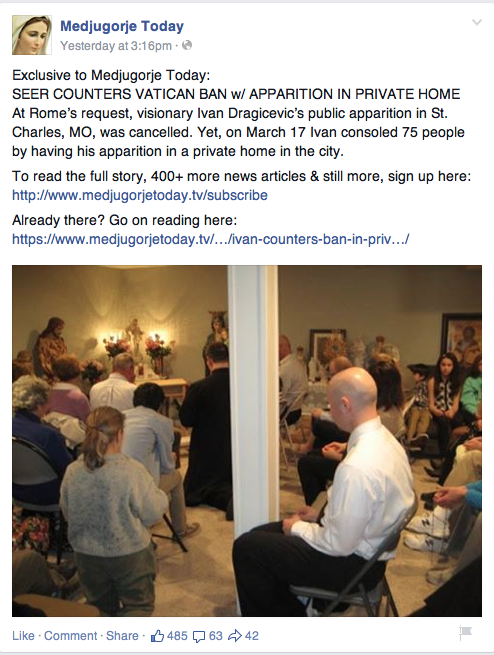 Allegory: A boy, a door and a window


I'm going to give a simple allegory for consideration.  A boy is told by his father, in front of his friends, not to go out the door to play outside.  The boy goes to his room and proceeds to climb out a window, with his friends encouraging him.  Was the boy obedient?  Were his friends respectful of his father's wishes? It doesn't take a university degree to understand that the father's intent was for the boy not to be outside playing; that the boy was disobedient, and his friends were disrespectful to his father because they heard what he said.


Let's back up a bit. So, Cardinal Müller, speaking through Apostolic Nuncio, Archbishop Vigano, stated in a letter sent to all U.S. bishops, in 2013, that, "clerics and the faithful are not permitted to participate in meetings, conferences or public celebrations during which the credibility of such 'apparitions' would be taken for granted." [emphasis mine in bold]

A reasonable person reading that should understand that the CDF simply does not want events that promote the alleged apparitions of Medjugorje before the Holy Father completes his discernment and makes that known. Whether he will do that soon (it's been five years since the Commission was announced), or kick the can down the road, is unknown.


Last week the CDF intervened in St. Louis to stop an event involving Ivan Dragičević. Reportedly, over 1000 people were planning to attend, with tickets sold and a center rented.  Archbishop Carlson said he was to remind people that, "they are not to participate in events that promote the so-called visionaries of Medjugorje and in particular Mr. Ivan Dragičević." He then said, "please make this information available to the Lay Faithful." After pointing out that an event on March 18th had been cancelled, he said, "No other such events should be scheduled."

But an event was scheduled, two days… was it private?


Just for talking purposes, we would probably all agree that there is nothing private about using a restroom with 75 people watching.  If you do that, you are basically doing your thing in public.

If Ivan Dragičević has his 'apparition' in a room by himself, then that is truly private. There is no one around to be influenced in such a way that, "promotes the so-called visionaries of Medjugorje and in particular Mr. Ivan Dragičević."  But, there is nothing private about Ivan having an 'apparition' in a residence with 10, 25, 75 or 175 people watching - people he does not know, mind you.  It's simply a public event, or meeting, held at a private residence.  It promoted the Medjugorje phenomena to everyone in attendance.

While information found at Medjugorje Today says it was by private invitation and no one was charged admission, I can't help but wonder: Were donations collected, and if so, how were they distributed and to whom?   If Ivan and the other visionaries of Medjugorje have daily 'apparitions' in a private room by themselves, there is no question about money (this goes to the criteria for discernment of presumed apparitions).

On the public Facebook page of Medjugorje Today, comments swelled in this thread which discussed the, "no charge" and "by invitation only" public event that took place in a private residence.  Remember what I said about the boy who climbed out the window to get outside, but probably didn't feel he did anything wrong because he listened to his father by not going out through the door.  I call it justification gymnastics, others might call it mental gymnastics. 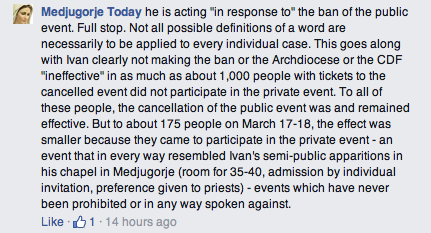 Justification gymnastics like this could be mitigated if the Church explained more, and in a way that does not require an understanding of "Ecclesial-speak." Men - that is bishops - who have spent many years conversing with others who have backgrounds in philosophy, theology, Church history, canon law, etc., sometimes are not perceptive about what can be misconstrued, or possibly exploited.

It's clear to me, even in the 1991 Zadar Declaration, which is still in effect, that pilgrimages were permitted on condition that supernaturality was not presumed.  This is repeated over and again in official communications on Medjugorje, with similar language each time. Coupled with that in the Zadar Declaration, it says, "a healthy devotion towards the Blessed Virgin Mary according to the teachings of the Church may be promoted."  What does that mean, "according tot he teachings of the Church?" That piece of Ecclesial-speak is not necessarily understood by those gravitating towards alleged Marian apparitions.  One place we can look to see what that means is, "Marialis Cultus" (1974). You will find the Rosary and Angelus promoted, and these have a very long history in the Church.  What you will not find is attending prescheduled apparitions, or using devotions, hymns, and medals not yet sanctioned, inserting references into the liturgy of the alleged apparition, etc.


Something is messed up


So, 1000 people were estimated to be coming to the main event believing they would be in the presence of Mary via a vision on demand by Ivan…  before it was unceremoniously cancelled.  Would those same 1000 people come to the cathedral in St. Louis to pray a Rosary and do a Holy Hour with Archbishop Carlson if he invited them?  Would they attend a public Rosary at their local parish if the parish priest scheduled it?

Or, does the spectacle of receiving the sight of someone having an apparition of an alleged heavenly being mean more than the simple act of giving to Mary a humble prayer and expecting nothing in return - no special messages, no sight of a glowing statue, no dancing or spinning suns, no Great Signs, or a Rosary turned to gold.


Being mindful, we don't know if the lady of Medjugorje is Our Lady


Some devotees believe so strongly that the lady of Medjugorje, is the Blessed Virgin Mary, that anyone who points out certain facts or questions credibility is treated as if they are attacking the Mother of God.  See the response one man gets from a devotee after he simply quotes what Archbishop Vigano stated in his letter to U.S. bishops (same thread as cited earlier; I blacked out the names).

I pray we hear something soon, very soon.  However, I will not hold my breath. If there is anything that is predictable about the timing the Holy See has on Medjugorje, is that it is unpredictable.

COMMENTS ON THIS BLOG HAVE BEEN DISABLED INDEFINITELY.

Note: The recommended links below are automatically generated by the tool, so they are not necessarily related content.
Posted by Diane Korzeniewski at 11:24 PM