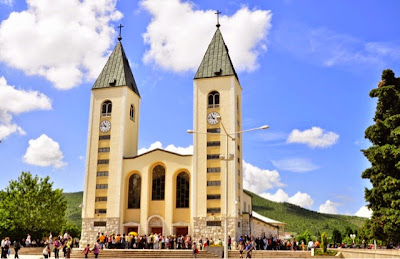 Recently, there were advertisements online for "An Evening with Our Lady and Ivan Dragicevic," but it is now missing. The alleged visionary of Medjugorje was to be hosted by the Blessed Anne Catherine Emmerich Foundation in Missouri.  This flew in the face of a 2013 directive from Cardinal Müller, Prefect of the Congregation for Divine Worship, in a memo to U.S. bishops through the Apostolic Nuncio, Archbishop Vigano. The letter included lay people in those "not permitted" to participate in Medjugorje related events, especially involving any of the alleged visionaries. After reviewing the status of Medjugorje and noting the Holy See was still investigating, Cardinal Vigano stated:

"It follows, therefore, that clerics and the faithful are not permitted to participate in meetings, conferences or public celebrations during which the credibility of such 'apparitions' would be taken for granted."

The Medjugorje event in the St. Louis area with Ivan was cancelled on March 2nd, but no explanation was provided by BACE Foundation at that time. Today we learn it was, in fact, Rome which intervened. This is explained in a statement by Archbishop Robert Carlson of St. Louis, dated March 3rd.

I don't know if the Archbishop himself was aware until contacted by Rome, though I do know someone who contacted that archdiocese some weeks back asking if this should be happening.

Just three days ago, the St. Louis Review, the publication of the Archdiocese of St. Louis, published the news.

The international theological commission on Medjugorje was first announced on March 17, 2010. Next week, five years to the day, the Bishops of Bosnia & Herzegovina (BiH) will have their ad limina visit with Pope Francis.

This does not seem coincidental.  After five long years, perhaps we will finally see the question of Medjugorje answered soon.  With the feast of the Annunciation coming up, it seems a fitting time of year for this.  This is a feast day known for Mary's fiat to the will of God (Luke 1:38).

My greatest hope is that truth will prevail, whatever that truth may be.  Mercy and compassion for others must subsist in truth.  And, as justice delayed, is justiced denied; truth delayed, is truth denied.

May the Holy Spirit, and the Blessed Virgin Mary, enlighten our spiritual fathers to discern this phenomena and share that truth with the all the faithful.

Posted by Diane Korzeniewski at 11:40 AM