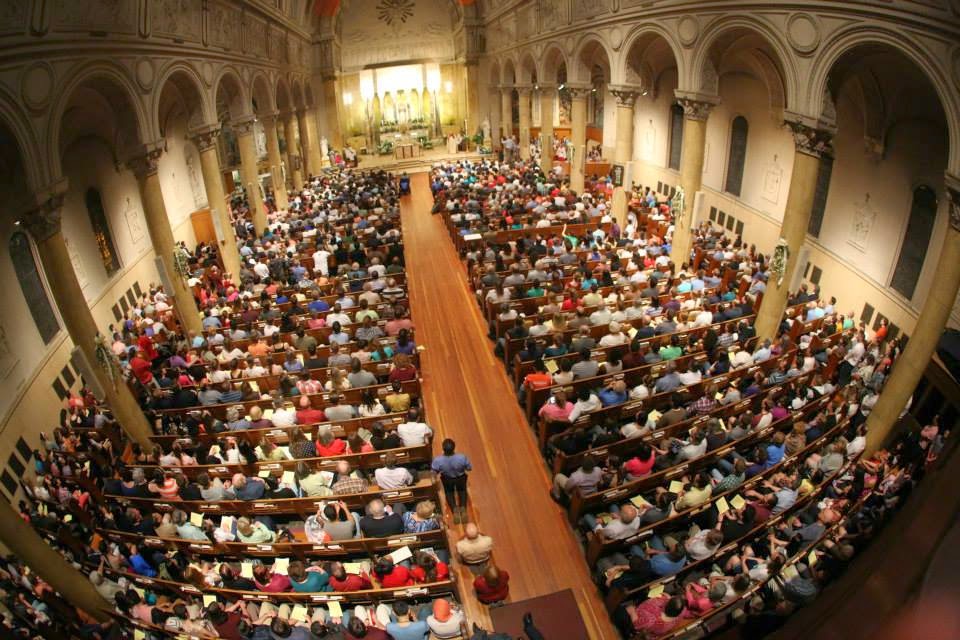 That was the scene last night at St. Paul's - the chapel used by Catholics at Harvard as a Satanic "Black Mass" was to take place, but organizers were left scrambling at the last minute for an off-campus location. More on that in a minute.  The Archdiocese of Boston arranged this Holy Hour with Adoration which was preceded by a Eucharistic procession.  Over 40 pictures have been uploaded to a post on the public archdiocesan Facebook page including the one above by George Martell/The Pilot Media Group.  As you can see, there was hardly any standing room.   Here are a few more images from the same photographer/group. 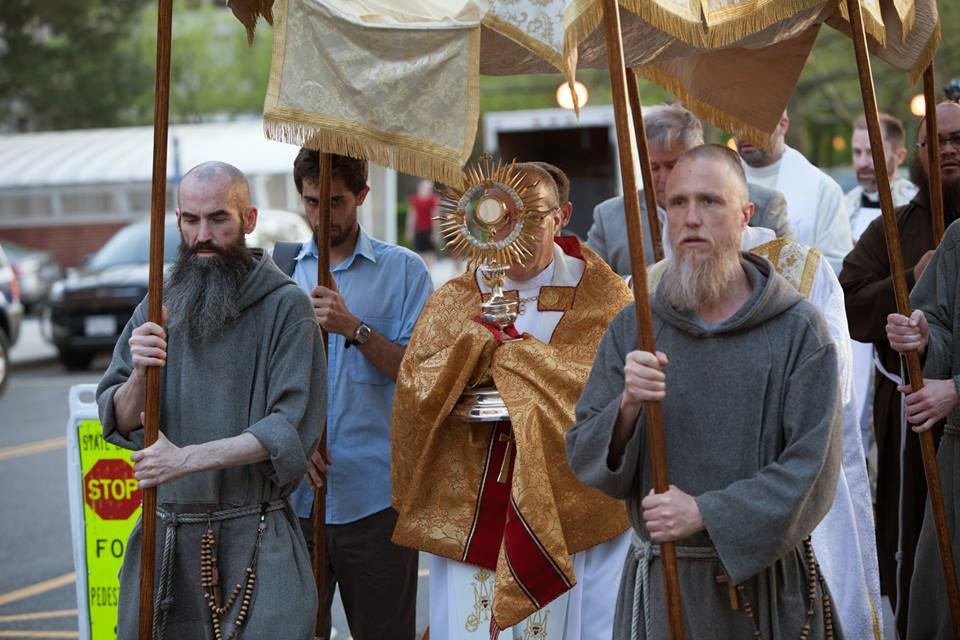 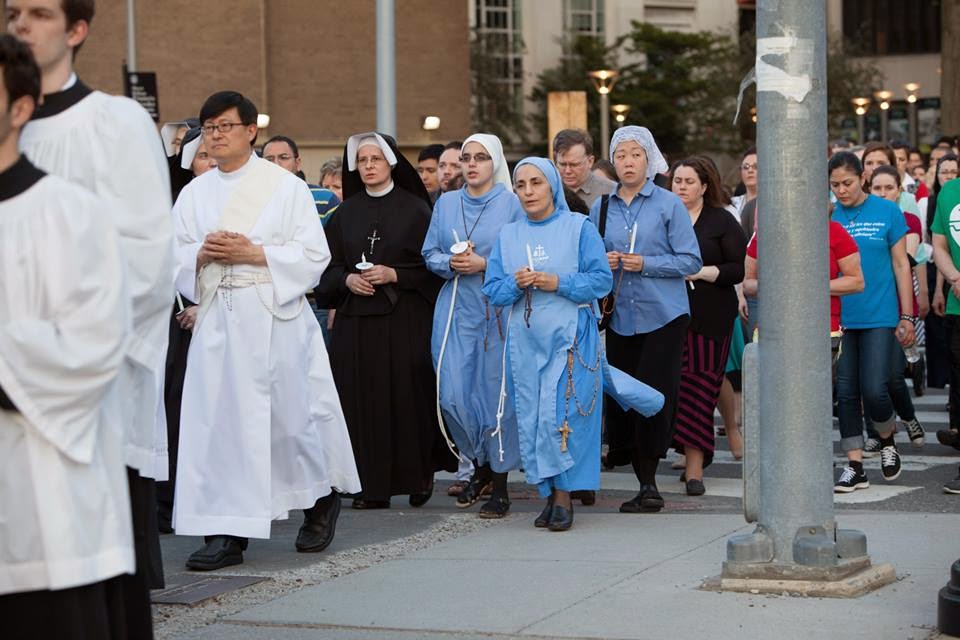 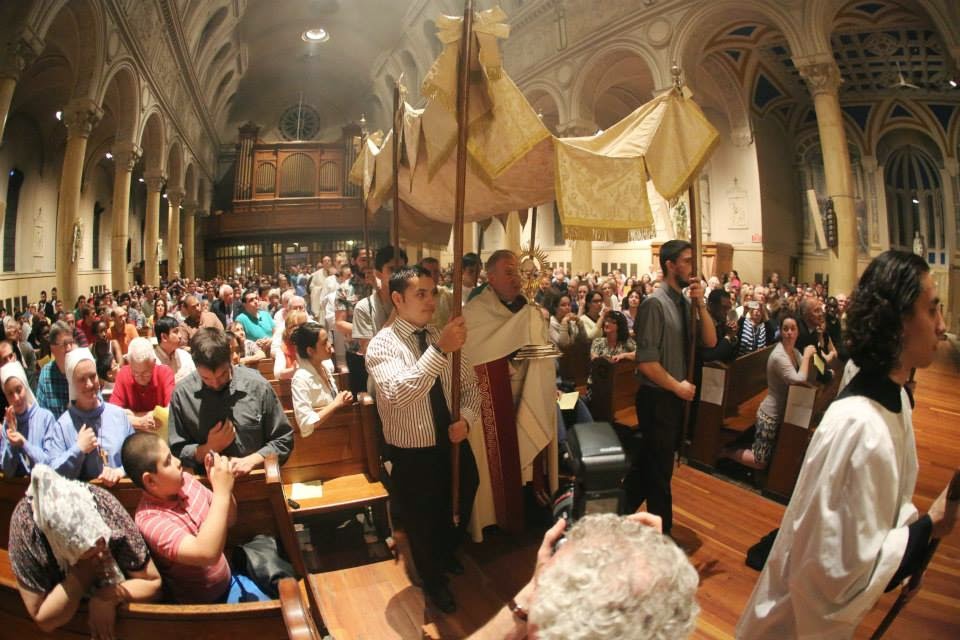 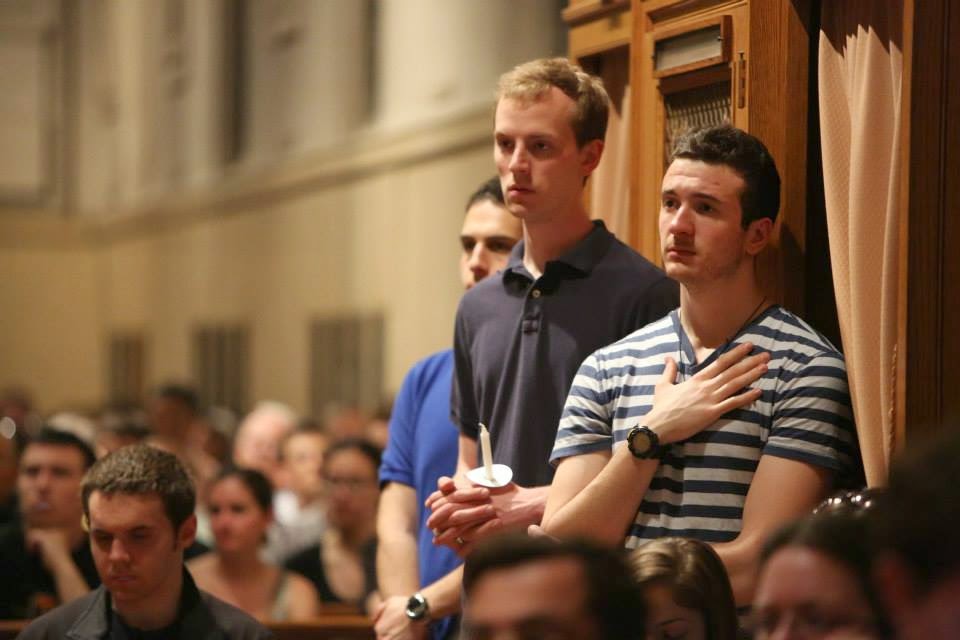 View them all here.


A reenactment of satanic rituals known as a “black mass” that had been scheduled for Monday evening on the Harvard campus was abruptly canceled amid a chorus of condemnation from Catholic groups and university officials and students.

However, a scaled-down version of the event, without the original sponsorship of the Harvard Extension Cultural Studies Club, was apparently held late Monday by members of the New York-based Satanic Temple off campus, at the Hong Kong lounge in Harvard Square.

Lucien Greaves, a temple spokesman, said in an e-mail at 10:35 p.m. that the mass was “happening now” at the Hong Kong. He did not say how many people were participating or provide specifics on what was happening.

A lounge employee, who would only identify himself as Fred, said in a phone interview that temple members were drinking at the bar, but he did not believe they were performing any rituals.


You can read more about what transpired last night at their website.

Let's be clear about their new venue. 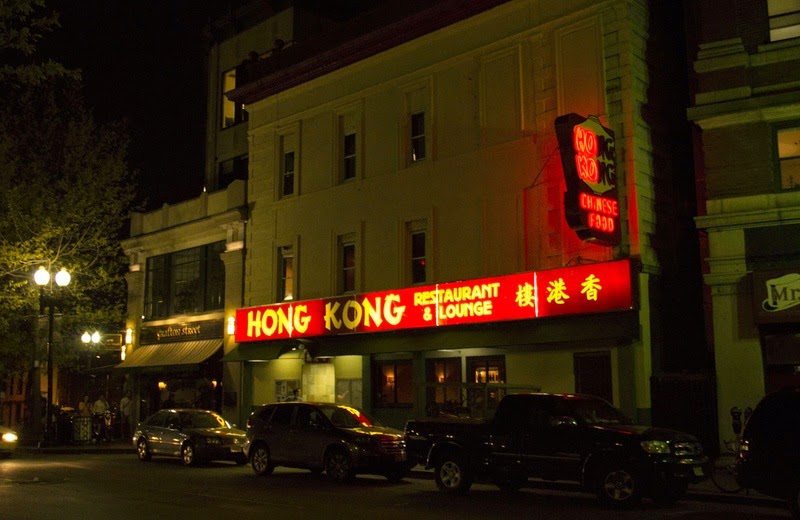 Well, make no mistake, if it did happen at this tiny restaurant, it was still a grave offense - one worthy of making reparation for.  But,

Earlier in the day, Harvard president, Drew Faust said in a statement:

"...The 'black mass' had its historical origins as a means of denigrating the Catholic Church; it mocks a deeply sacred event in Catholicism, and is highly offensive to many in the Church and beyond. The decision by a student club to sponsor an enactment of this ritual is abhorrent; it represents a fundamental affront to the values of inclusion, belonging and mutual respect that must define our community. It is deeply regrettable that the organizers of this event, well aware of the offense they are causing so many others, have chosen to proceed with a form of expression that is so flagrantly disrespectful and inflammatory.

Nevertheless, consistent with the University’s commitment to free expression, including expression that may deeply offend us, the decision to proceed is and will remain theirs. At the same time, we will vigorously protect the right of others to respond—and to address offensive expression with expression of their own.

I plan to attend a Eucharistic Holy Hour and Benediction at St. Paul's Church on our campus on Monday evening in order to join others in reaffirming our respect for the Catholic faith at Harvard and to demonstrate that the most powerful response to offensive speech is not censorship, but reasoned discourse and robust dissent…"


And, she did attend, as seen in the photo from the same collection.

Unfortunately, what she failed to grasp was that it wasn't just the sensitivities of Catholics that was in need of defending, but defending the Eucharist from a ritual that historically involves desecration. Catholics have died while protecting the Eucharist.  Recall the twelve year old St. Tarsius who died in this fashion.

Pontius Pilate and the 'personally opposed, but' position


Blogging canonist, Ed Peters, had something to say about President Faust's statement.  It should serve as an examination of conscience for all of us when faced with these kinds of challenges based on the modern 'virtue' of so-called tolerance.  We should consider the times when we may have taken the road traveled by Pontius Pilate:


Amid growing controversy over the planned crucifixion of Jesus of Nazareth, Roman procurator Pontius Pilate, who is on record as being personally opposed to the execution of the preacher Jesus, said in a statement released today that it is “deeply regrettable” that crucifixion agitators will proceed despite the fervent opposition by some local residents and students. But he continued, “Nevertheless, consistent with the commitment to free expression, including expression that may deeply offend us, the decision to proceed is and will remain theirs.” Pilate added, “I wash my hands of the whole affair.”

Sound familiar? Compare it to this report on Harvard President Drew Faust’s statement about the Harvard Black Mass


You can read the rest of his post here.


Just how did the 'black mass' originate, and when?  Michelle Bauman, writing for Catholic News Agency explains:

A black mass is a sacrilegious ceremony structured as a parody of the Catholic Mass. Connected to witchcraft and demonic worship, it invokes Satan and demons, often in Latin.

The ceremony is centered around the desecration of the Eucharist, which is generally done by stealing a consecrated host from a Catholic Church and using it in a profane sexual ritual, or defecating and urinating on it.


This is one reason why there is a growing number of Catholics wanting to see a return to distribution of Holy Communion, on the tongue.  Imagine how difficult it is to use a Consecrated Host after it has been in someone's mouth.  It is possible, but less likely than when one receives in the hand.   There is nothing good about a 'black mass,' but where there is sin, grace abounds (Rom 5:20).  One grace I see is that Catholics are seeing that there really are people out there who want to desecrate the Eucharist.  This isn't something from the dark ages - it's happening all the time, but usually in secrecy.  I think these folks would have preferred not to have this flood light shining on their dark gig, but it's a good thing it was all brought to light.

A spokesperson for The Satanic Temple, which is staging the event, initially told media outlets that a consecrated host would be used, although the temple and the Cultural Studies Club both later denied this, insisting that only a plain piece of bread would be used.


It's a little hard to have a 'black mass' without a Consecrated Host since desecrating It is at the heart of the matter.  And, let's face it, why should we accept the word of anyone who worships the Father of Lies?

Responding to widespread criticism, the Cultural Studies Club told CNA that those offended by the event have closed-minded beliefs “based on intolerance and ignorance,” which are “arrogant and egocentric.”

The club claimed that the black mass “began as a propagandistic literary device to justify brutal purges against alleged witches,” saying that “(t)he idea originated with the Church itself.”

However, Pecknold responded that it “is patently false to claim that the idea of the Black mass originated with the Catholic Church itself.”

“The Black Mass is largely a modern invention of anti-Catholic propaganda. Anton LaVey (founder of the Church of Satan and author of The Satanic Bible) admitted that much.”

“What we really should be asking is what the sponsors of the Black Mass are aiming at. What is their goal?” Pecknold continued.


Exactly.  If a 'black mass' isn't aimed at promoting hatred, I don't know what is.

“The sponsors claim not to be mocking the Catholic faith, but that is precisely what Black Masses are designed to do: ridicule, desecrate and mock that which is most sacred and holy to Catholic Christians. Can you imagine if the same group treated the Jewish or Muslim faith this way?”

“My guess is that the aim is not reasoned argument, but spectacle designed to test the limits of toleration,” he suggested.


Go to CNA to read the full article, which discussed other forms of intolerance.


Earlier in the day Cardinal O'Malley, asked about the 'black mass,' called it "repugnant," saying there is such a fascination with evil in the world.  He wondered aloud why the university would permit something which is offensive to so many people to take place on campus.   He acknowledged to the reporter that he had asked that it be canceled.

Pray for all involved.  There will be hell to pay.

Note: The recommended links below are automatically generated by the tool, so they are not necessarily related content.
Posted by Diane Korzeniewski at 7:10 AM