So, you have probably read or heard that St. Thomas Aquinas says that we can correct our bishops, even in public.  I'll bet you haven't seen the rest of what the Angelic Doctor said on the subject.  He is often quoted thus:

It must be observed, however, that if the faith were endangered, a subject ought to rebuke his prelate even publicly.


However, people stop there, without studying all that the Angelic Doctor said on the subject of correcting a prelate.  If all of us spent as much time with our noses in the Summa as we do perusing Catholic commentary about current events, we might actually become holy witnesses for the faith.  Some of what is out there is downright disturbing and a danger to any soul humbly pursuing holiness and virtue.  There's nothing like adding water in a gas tank to make it go nowhere fast. One such spiritual danger is the sport of bishop-bashing.   Paul rebuked Peter just once, not daily.

If you think members of today's episcopacy are more plagued with problems than bishops of past centuries, you don't know your Church history.   It was just a few decades ago that it took weeks or months for us to learn what a pope said, and it was only periodic that something was deemed worthy to disseminate more publicly. Now, a bishop can't burp without someone tweeting it. As one of the priests at my parish recently pointed out: Who knows what seemingly outrageous things popes did or said outside of official business that would have scandalized us if the technology we have today, had been in place then?

So, what does Aquinas really say?


After explaining that we may not correct a prelate as a matter of justice, but only as an act of charity, Aquinas says (emphasis mine in bold):

"...a virtuous act needs to be moderated by due circumstances, it follows that when a subject corrects his prelate, he ought to do so in a becoming manner, not with impudence and harshness, but with gentleness and respect. Hence the Apostle says (1 Timothy 5:1): "An ancient man rebuke not, but entreat him as a father." Wherefore Dionysius finds fault with themonk Demophilus (Ep. viii), for rebuking a priest with insolence, by striking and turning him out of the church."


St. Thomas is telling us that we can slay a priest with the sword of our tongues!  We get to engage in fraternal correction, but we do not get to do it our way; rather, it has to be done God's way. This does not involve mocking bishops and making them the butt of disrespectful jokes and commentaries, even when we believe them to be in error.

In discussing this with some solid, orthodox, holy and spiritually mature priests I know, I was reminded about how David had the young Amel'ekite slain after he took credit for dispatching Saul (who had tried to kill David). Upon hearing the young man claim he ended Saul's misery, David tore his shirt then ordered his death, saying:


“Your blood be upon your head; for your own mouth has testified against you, saying, ‘I have slain the Lord’s anointed.'" (2 Sam 1:16)

If you have read the life of Saul in the Old Testament, you will know he was no saint. Nonetheless, he was anointed by God.

Going back to Aquinas on fraternal correction of prelates, in responding to Objection 2, which points to Paul rebuking Peter, Aquinas writes:

To withstand anyone in public exceeds the mode of fraternal correction, and so Paul would not have withstood Peter then, unless he were in some way his equal as regards the defense of the faith. But one who is not an equal can reprove privately and respectfully. Hence the Apostle in writing to the Colossians (4:17) tells them to admonish their prelate: "Say to Archippus: Fulfil thy ministry [Vulgate: 'Take heed to the ministry which thou hast received in the Lord, that thou fulfil it.' Cf. 2 Timothy 4:5." It must be observed, however, that if the faith were endangered, a subject ought to rebuke his prelate even publicly. Hence Paul, who was Peter's subject, rebuked him in public, on account of the imminent danger of scandal concerning faith, and, as the gloss ofAugustine says on Galatians 2:11, "Peter gave an example to superiors, that if at any time they should happen to stray from the straight path, they should not disdain to be reproved by their subjects."


That paragraph above had the sentence often quoted in isolation, in full context. And, it must be taken in the context of the other points made by St. Thomas, namely to be respectful in carrying it out.  In his reply to Objection 1, which used Exodus 19:12 as justification to not correct a prelate, he makes this clear and points out the distinction:


You would be hard pressed to find any place in the section on fraternal correction of prelates, where Aquinas allows us to speak in such a way as to make them look like buffoons, even when they may be in error.   Quoting one more time, from his main answer in Article 4:

When a subject corrects his prelate, he ought to do so in a becoming manner, not with impudence and harshness, but with gentleness and respect.

Something should be said here about encouraging people to speak with impudence, harshness and disrespect.  All it takes in this media driven era, is lots of hits to encourage someone to do more of the same.  I try to avoid sources that poke fun of bishops and mock them, especially on a frequent basis for this reason, but sometimes things come to my attention.  On the other hand, I have shared some critiques of something a bishop said or done, when I felt it was written with due respect for the office.  These are usually done dispassionately and devoid of name-calling, and entertaining put-downs. Those critiques appeal to reason, not just of the reader, but hopefully of the bishops themselves, rather than appealing to emotions and feelings.


Don't read a sentence in the Summa in isolation 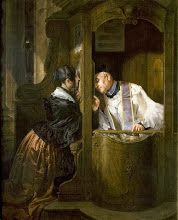 If five people used a sentence or two in isolation, you can see that different conclusions could be drawn by each. We now know there is an acceptable form, to God,  of fraternal correction of prelates. We also know of ways to engage in it that are offensive to God (and thereby worthy of Sacramental Confession).  This may be vague, but Confession can be a discernment aid.


Sometimes when I have criticized a priest or bishop publicly, or even in conversation with others, I take the matter to a trusted priest in Confession and let him pass judgment on what I said, how I said it, even when I think I am in the right. Of course, building virtue is dependent on how honest you are with the priest and this takes serious reflection and being honest with oneself.  Time in Adoration is the best place to cool off and do an examination of conscience.  Using Sacramental Confession in this way is how you learn. Of course, this is dependent on finding not just a solid, orthodox priest, but one who is spiritually mature and holy.  There's a difference.  A priest who knows the faith well and celebrates a good liturgy is not necessarily spiritually mature in terms of virtue.  The best thing to do is ask God to help you discern the best possible confessor available, then trust him.

Read the entire section on Fraternal Correction in the Summa, several times.  Then, put it aside and come back to it again later.  Review it a few times yearly.  Share the link with others when you see isolated quotes.

Reading the Summa can be intimidating.  Here is a useful, simple aid on the structure.

For those who like detail, the New Theological Movement has one.

Also, the language in the Summa may make things difficult to understand, especially for those of us without background in philosophy.  However, don't be afraid to go back to the old habit of using a dictionary. Many are online, including philosophy encyclopedias.  That said, even if you understand the words, but struggle putting it together, just say a prayer and read it slowly a few times.  Put it away and come back to it later.  Sometimes, it's best just to let the one thing go and keep going as it may have no ill effect on the thing you are trying to glean from the passage.

Note: The recommended links below are automatically generated by the tool, so they are not necessarily related content.
Posted by Diane Korzeniewski at 12:33 AM