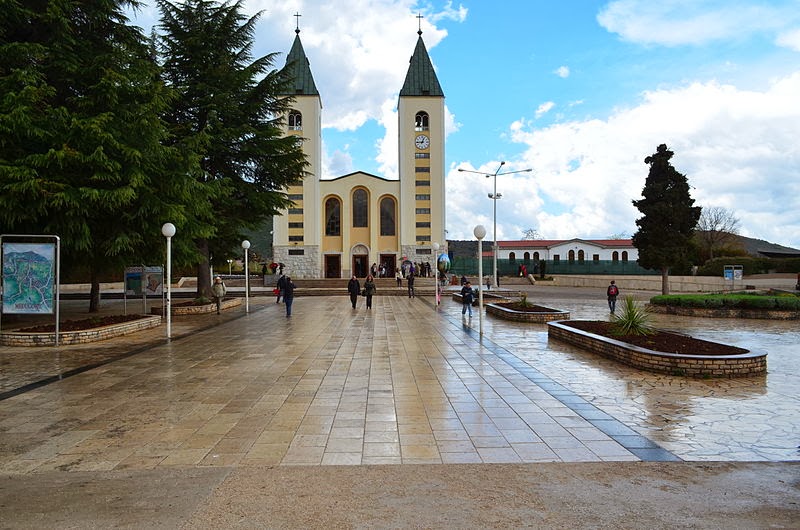 UPDATE 1: The Vatican Information Service now has this news up.  It was not available when I was composing this post.  Here is what it says:

(Vatican Radio) The Director of the Holy See Press Office, Fr. Federico Lombardi, confirmed on Saturday that the international commission investigating the events in Medjugorje held its last meeting on 17 January. The commission, created by the Congregation for the Doctrine of the Faith, is presided by Cardinal Camillo Ruini.

The commission has reportedly completed its work and will submit the outcomes of its study to the Congregation.

There is speculation in a popular, secular, Croatian paper that the status quo will be maintained. However, unlike the other reports I discuss below, it acknowledges that it is *assumed* the 1991 decision will be maintained on the basis that the visions are ongoing.  You can put that article into a google translate.  People speculate on both sides, but at least this source was clear that it is an assumption.

Additional updates will be posted here.
Below this line is my original post.

The Italian news agency ANSA is reporting that Fr. Lombardi has confirmed that the International Commission of Inquiry on Medjugorje is done and has sent their findings to the Congregation for the Doctrine of the faith.  This is an unedited Google translate:


CITY 'OF THE VATICAN - It took place yesterday, the last meeting of the International Commission of Inquiry on Medjugorje, presided over by Cardinal Camillo Ruini. The outcome of the study will now be submitted to the Congregation for the Doctrine of the Faith. This is confirmed by the director of the Vatican press office, Father Federico Lombardi.

The Vatican spokesman said that "yesterday, Friday, January 17, took place the last meeting of the International Commission of Inquiry on Medjugorje, established by the Congregation for the Doctrine of the Faith under the presidency of Cardinal. Camillo Ruini." The Commission "has thus completed its work," explains Father Lombardi. "As expected - he adds - the outcome of the study will now be submitted to the competent instances of the same Congregation."


Yesterday, some Croatian news outlets were reporting something from Nova TV which suggested the findings were, "neither yes or no" and that they were okay with people visiting there.  Someone from Croatia looked into it for me and had this to say about the wording:

The article says Commission decision is "niti da ni ti ne, vec da se povjerenstvo ne protivi..."--neither yes or no, but that they don't object people going there. This could also mean that they couldn't agree on the verdict, but agree people can continue to go there. OR maybe that their job wasn't the final verdict but just to decide if people can continue to go there.


I'm inclined to believe that it is more like the latter because that is consistent with what the Holy See has said all along.  The final say is not with the commission, but with the Holy Father, after the CDF reviews the findings.  It seems to me there was confusion over a similarly leaked rumor to a media outlet before, misinterpreting a "neither yes or no" statement from someone on, or close to, the commission.

Everyone is free to guess or speculate in the absence of information and there will be plenty of it as we wait.  No one knows whether the CDF will take some time with the findings, or if it has been following proceedings all along and is ready to send it on to Pope Francis.

I find it hard to believe such a commission would go on for four years only to end up at the same place.  Could it happen?  Sure.  Is it likely?  I have my doubts. If there is anything at all which points to a lack of authenticity, I do not believe the Church will engage in a kind of consequentialism where they allow a lie to persist for the sake of good fruits.  I know former "Baysiders" who acknowledge the falseness of that condemned apparition, but who credit the experience with bringing them back to the Church.  It wasn't the false apparition that did it, but the graces that came when they began praying the Rosary daily and using the Sacraments frequently.

The best possible outcome for devotees is for the Holy See to maintain the current status of non constat de supernaturalitate (it cannot be affirmed as supernatural).  It's an unfortunately vague judgment to the ordinary lay person. It is the best hope for devotees because the Church does not approve ongoing, alleged apparitions. The reason is simple: If today the Holy See gives approval, and tomorrow the presumed apparition starts talking about the fourth person of the Trinity, we would have a serious problem; and, the credibility of the Church, seriously harmed.

However, the Church has intervened in other cases and given negative judgments against ongoing phenomena for the good of the faithful.  Usually this is at the local level, such as when the Holy See invited Bishop Lennon of Cleveland to make a definitive judgment on what was taking place at Holy Love Ministries. That's still ongoing and people there try to say it is not over, but when the Holy See invited that bishop to make a definitive judgment, it was clear it was the judgment of the Church, not just an opinion of the bishop. People are free to write to the CDF and inquire if a definitive judgment has indeed been made in that case, but I will not be posting comments defending those false apparitions.  On November 14, 2009, just three days after that decree by Bishop Lennon, came this "message."  My comments in red, emphasis in bold.

"I have come to issue forth this Decree of Truth [Bishop issues a decree condemning the "apparition" as not supernatural and the "apparition" issues it's own decree]. The Holy Spirit is alive and well here at this apparition site. Indeed, Heaven and, I Myself, have taken possession of this property [like I said, run quickly away from this place]. No one can prove otherwise no matter his distinction in the world."  [That was a jab at the bishop.  In other words -a pretty clear, "non serviam"].


Back to Medjugorje, in any case, as I reported yesterday, Cardinal Puljic has had enough, which is what the headline says here in Croatian.  He's actually been working on the matter for five years. 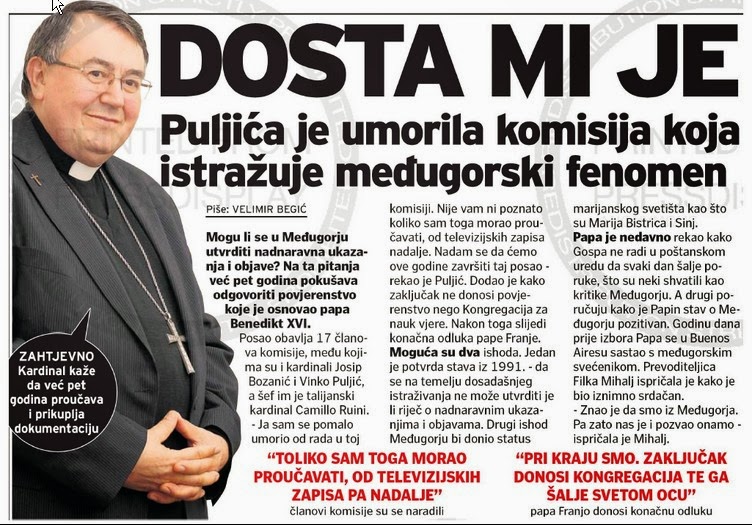 The best thing we can all do is pray for the CDF and for the Holy Father.  As I have said many times before, we should not pray for approval or disapproval, but for truth to be found and made known.  That is my prayer.

Note: The recommended links below are automatically generated by the tool, so they are not necessarily related content.
Posted by Diane Korzeniewski at 8:16 AM