Because you keep asking: Some thoughts on Pope Francis and Medjugorje 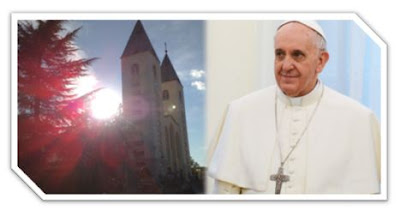 I've have been receiving emails and messages from people asking me for my thoughts on Pope Francis and Medjugorje.

First, let me preface this by making an observation: Authentic apparitions don't need any "selling" because they "sell" themselves.

As the words, Habemus Papam were pronounced, the machine was already in gear to form public opinion in such a way as to lead everyone to believe Pope Francis is all for Medjugorje.  Keep in mind, he is no longer responsible for one See of many; he is responsible for them all now. While promoters of Medjugorje have no qualms about showing their contempt for the local bishop of Mostar-Duvno, I just don't see Pope Francis following suit.

"Card. Bergoglio approved of Ivan's apparitions in a stadium a few weeks before being named Pope" is one narrative.

News reports from Buenos Aires say Ivan filled a stadium of about 5,500 people just days after he had a similar turn out at another local venue for a total of around 10,000 people between the two events, in early March this year.

One thing you will learn about sites that promote Medjugorje, is that numbers are considered a sign of authenticity even though such an attitude is contrary to the last word from the CDF concerning pilgrimages in it's 1998 letter to Mons. Gilbert Aubrey:

Finally, as regards pilgrimages to Medjugorje, which are conducted privately, this Congregation points out that they are permitted on condition that they are not regarded as an authentification of events still taking place and which still call for an examination by the Church.


So, if people think the CDF is going to factor in how many people came to an event to gage authenticity, it's not going to happen. It's been said that Pope Francis knows how to delegate, so I trust he will show interest in the work done by CDF and the International Theological Commission on Medjugorje.

The same reports also claim that these apparitions on demand in stadiums had the "blessing" of Cardinal Bergoglio.  Anyone can claim anything at all, but proof would come in the form of something written and made public.  When I go to anything offered by an apostolate or group, and they claim they have the local bishop's approval, I can open the program booklet and see a personal message from the bishop with his endorsement.  Such a message can be posted in flyers.  If I don't see it in writing, then it is nothing more than an unproven claim. Even if he did give some kind of approval or nod, it was still as a Cardinal in Argentina, who likely did not have all of the relevant facts. Who can claim to know all that is in the CDF's and Commission's files on Medjugorje? As he learns more, his attitude will shift accordingly. That's natural.

Another narrative goes something like this: "Fr. Jozo Zovko spent a lot of time conversing with Card. Bergoglio in the late 1990's about Medjugorje while he was in Buenos Aires."

This, I believe is originating from an article in Slobodna Dalmacija that is basically promoting the idea that Cardinal Bergoglio is pro-Medjugorje.  In it, we find that a reporter had contacted Fr. Jozo Zovko who remembered he went to Argentina and he asked him for his thoughts on Pope Francis.  Zovko, to his credit, told the reporter not to ask any questions on Medjugorje - not until the Holy See speaks on the matter.  So, he talked about his time in Argentina, specifically a meeting he had with Bergoglio.  It sounds like the Cardinal gave him some quality time and really listened to him - something that we are learning is pretty natural for him no matter who he speaks with.

I believe this happened exactly as Fra Jozo says it happened.

I also believe the same man, now Pope Francis, will be a good listener when the Bishops of Bosnia & Herzegovina, and Croatia, speak to him about Medjugorje.  Moreover, I believe the Pope will be a very good listener when the International Theological Commission reports it's findings to him. Likewise, I have trust that he will be interested in looking over more than 30  years worth of documentation at the CDF.  In Argentina, he may have heard Fra Jozo's side of the story, but surely a man of great charity will also hear the other side of the story, and he will hear the things Zovko did not tell him.

Unlike the Medjugorje movement which shows great disdain for the past and present bishops of Mostar, I trust Pope Francis will not dismiss their findings so quickly.  Might he listen to Bishop Peric as he listened to Fra Jozo? How about the other bishops in the region?

Pope Francis will have information on Medjugorje, not just on the visionaries, but on all those named as associates and spiritual directors along the way.  He will see all of the scientific and medical concerns laid out, not just the positive ones.  He will see how certain key players misled readers by curious omissions and altered text.  Good listener that he is, he will hear the good and the bad as he pursues truth.

What will Pope Francis do concerning Medjugorje?  This, I cannot know.

What do I hope and pray Pope Francis will do concerning Medjugorje?


Clarifying that last point, I believe incredible damage to the unity of the Church happened each time a bishop allowed visionaries to have "apparitions" on Church property in their dioceses, most especially when it happened in cathedrals and basilicas.  Nothing would have prohibited these things from happening on private property, but when they happen on Church property, it is seen as an authentification of events. It lends credibility to the alleged apparitions in the minds of those attending. So, a great chasm was widened each time Medjugorje visionaries had alleged apparitions in churches, shrines, basilicas and cathedrals.  Even if a bishop feels the apparitions are authentic, the most prudent and fraternally correct action is to follow the lead of the local bishop and his brother bishops united with him.  You will not find anywhere in Bosnia-Herzegovina, or in Croatia, where a bishop has allowed this, yet you will find it in other countries.  This is a very odd way to show collegiality. If official pilgrimages are prohibited, how then can any bishop justify bringing a pilgrimage, complete with visionary and visions on demand, to the diocesan cathedral?

I think this is a legitimate question to raise and I hope it is eventually addressed for the good of unity in the Church.  Nothing fuels disunity faster than seeing the hierarchy in visible disagreement.  If one has to err on one side of the other, why not on the side of caution, truly waiting for approval before parading alleged visionaries onto Church property where they summons some being that may or may not be heavenly? If it were to ever be approved, no harm comes in this kind of waiting. But, can we say it is equally as harmless to carry on as if it were approved, should it later receive a negative judgment?  What confusion are souls put through in such a case?  Who is responsible if their attachment becomes so great that they abandon the Church in pursuit of those signs and wonders, even in the face of a firmly negative judgment, should it come? Harmless?  Hardly!

Pope Francis loves Mary. I trust he wants true devotion to be fostered.  It has been endearing to watch him practically run to the statue of the Blessed Virgin Mary at the conclusion of the big papal Masses, like the one on Palm Sunday.  He is clearly devoted to the Blessed Mother.  So, I pray to her, that she helps him to discover the truth through the work that has been done by the Commission and the CDF, and that he acts accordingly.

People are going to say whatever they want to say concerning Pope Francis and Medjugorje.  I believe in the grace of office and I believe Pope Francis is a man who loves the truth, and who loves Mary.

If you want to do something valuable while you wait for the Holy Father to dig into all of this, pray for him.

I'm not going to worry about it. It's in God's hands.  Pope Francis may decide to table the matter for more pressing issues. Time will tell.


Update: I'm copying this in from my post on the recent invalid Confirmations near Medjugorje:

*An interesting side note:  Fr. José Rodríguez Carballo, OFM, has been appointed by Pope Francis as the Secretary of the Congregation for Institutes of Consecrated Life and Societies of Apostolic Life.  He has been the Minister General of the OFM since 2003. He signed the 2009 document announcing the laicization of Tomislav Vlasic, and was involved when the list of sanctions came down against him in 2008 as he was being investigated "in the context of Medjugorje."   As someone else just pointed out to me in Facebook, he is likely well familiar with all that is going on in Herzegovina and can bring Pope Francis right up to speed. 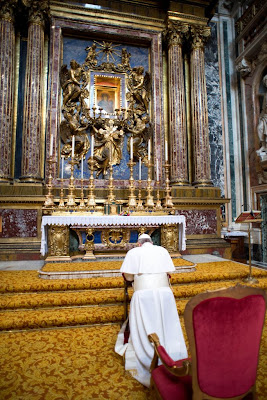 Note: The recommended links below are automatically generated by the tool, so they are not necessarily related content.
Posted by Diane Korzeniewski at 11:09 PM