Since I came to Assumption Grotto in 2005, I've watched Fr. Perrone work to transform the parish church to more closely match it's original state.  When walls were cleaned last year, holes that held up speakers, bulletin holders, and other things were patched. Strict instructions came from the pastor, "No more holes!" There were two sanctuary lights - the one seen in the center above, hanging from the ceiling, and another that had been in disuse that was off to the right.  I understand that is now gone.

Last Sunday, parishioners were met with a rather serious change: The table altar, or low altar,  which had fallen into disuse several years ago, is now in a new home and the parish has a portable one that can be used if a visiting priest or bishop would like to celebrate, versus populum.  Even Archbishop Vigneron used the high altar when he celebrated Mass on August 15, 2009 - his first Assumption Day as the archbishop of Detroit.

Fr. Perrone offered the explanation below in last week's bulletin.


A rather left-leaning priest once asked traditionally-minded religion students, ‘Which furnishing in the church is more important: the tabernacle, or the altar?’ Most answered: the tabernacle which, of course, was the wrong answer. This man, who has since left the priesthood, took delight in undoing the catechetical lessons and religious sensitivities the students had acquired. Even so, in this case, the impious priest was correct, though, cruelly, he did not explain to his students why. The tabernacle surely acquires an exalted dignity when it houses the Blessed Sacrament, but in itself, as a liturgical accouterment, the altar certainly holds a higher place since it is the place (Latin: locus) where the sacrifice takes place, where Christ is immolated. (Here’s an example of how someone–the priest–can be wrong, giving scandal and injuring the faith of his students, while himself being technically right.) This ‘correct’ liturgical understanding, by the way, is among the reasons often invoked for the setting aside of the tabernacle to a side position in many churches after Vatican II, an act that was not–one must hope–a deliberate and blasphemous snubbing of the Eucharistic Lord.

I write about the altar today because many of you, though not all, noticed a change in the sanctuary of the church last weekend. The low altar had been removed, allowing the high altar to shine in its full original splendor. Although I had intended to write to you about this in advance of its ouster, events moved too swiftly for me to do that. Our Parish Council members had been foretold of this intention sometime ago. No one then showed any dissatisfaction with the proposal. Indeed, everyone seemed intrigued to know how the church would have looked at its construction. I offer a brief ‘unscientific’ history of this subject.

The sanctuary now looks much as it did when the church was built in 1929, except for the two missing banks of ‘choir stalls’–those pews on each side, where altar boys sometimes now sit. (What could be done to restore the now absent stalls is a subject for another time). After the Second Vatican Council there was a popular movement in liturgical circles to have the Mass celebrated with the priest facing the people, even though this was never mandated by the Council nor by any subsequent directive of the Holy See. Grotto Church, like most others, began the practice with a temporary altar set up in the great open space before the high altar (which space had been created for the old solemn ceremonies of the Latin liturgy) so that a priest could celebrate Mass towards the people. While everyone could now see what was going on at the altar, the priest had his back symbolically to the Lord (the Eastward direction) or actually so (if the tabernacle were behind him). There were other logistical problems created by celebrating towards the people, such as in getting altar servers and concelebrating priests to look and perform decorously at Mass (which is one reason why so many Masses of recent decades have been celebrated so sloppily.) In 1978 Monsignor Sawher decided to replace the temporary low altar with a dignified and indeed beautiful marble altar that would in many ways be harmonious with the existing decor.

When I carefully studied the book The Spirit of the Liturgy by then-Cardinal Ratzinger (now Pope Benedict XVI), I realized that we ought to be facing East once again and not towards the people since that position inadvertently created a “closed circle” that did not aim towards heaven, towards God (East), but towards man (symbolically indicating that man and not God was the focal point of the Mass). In the early years of my pastorship here, the low altar was used variously: first, facing the people; then facing East; and then, with a move of the altar farther back some feet towards the main altar, with the priest still facing East. We were getting progressively more in line with an ideal.

to use the low altar while neglecting the church’s original. In addition, there was a problem having two altars. There ought to be only one altar prominent (main) in a church, not two. Moreover, for the celebration of the Tridentine Mass (now once again available to us), the low altar kept getting in our liturgi- cal way.

Fine, you may say, but what is to be done should a visiting priest want to celebrate Mass facing the people? We have already provided for that in having readily available an altar that can be set in place in a matter of minutes. It too is suitably made, containing an true altar stone and thus worthy of Holy Mass.

So, there you have it: The Story of the Low Altar in Grotto Church. My final word is a personal one. Although the former low was well designed and well crafted, it did obscure the complete view of the high altar and it did impede the liturgical movement in the sanctuary (I even now tend to avoid walking in the space where it once stood, imagining that I might run right into it). I believe that this elimination of the extra altar is a case where the saying holds true: Less is more.

I don't know anyone who didn't want the low altar to be removed.  Grotto-goers expect Mass to be celebrated ad orientem, and at the high altar.

In this photo from Holy Thursday (2009), you can see how the low altar obstructs the view, and the
workings of ministers and altar boys as they move about.  There was no such thing as a straight line to the high altar as there is now, with only one altar. 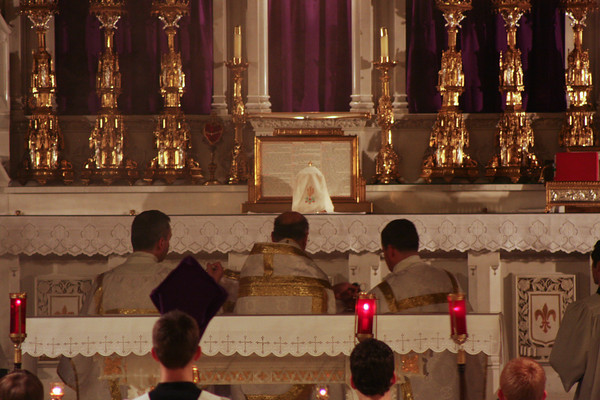 Note: The recommended links below are automatically generated by the tool, so they are not necessarily related content.
Posted by Diane Korzeniewski at 7:26 PM