Catholic Lane is one of many Catholic portals I visit. I was pleasantly surprised to see an article about Assumption Grotto and our feast day coming up on August 15th by Grotto parishioner, Joe Maher, President of Opus Bono.


On Wednesday, August 15th Catholics from all over Northeastern United States and Canada will converge on one of the hidden jewels of Detroit; a 131 year old replica of the miraculous Shrine of Our Lady of Lourdes in France. In 1858, a peasant girl by the name of Bernadette of Soubirous claimed to see a vision of the Blessed Virgin Mary in Lourdes, France. Shortly after, many healings were reported at the crude grotto where Bernadette’s vision took place. Since then a magnificent shrine has been built in Lourdes, France at the site of the apparitions and millions of pilgrims from all over the world have visited it seeking healings and conversion.
Like at the Lourdes Shrine in France, the faith and devotion of pilgrims to the Detroit replica of the Lourdes Shrine at Assumption Grotto Catholic Church are often rewarded by God with conversions and cures. People who are in their seventies and eighties today remember seeing as children all the crutches and braces piled up at the shrine at Assumption Grotto Church. Some of these are now housed in a reliquary in the shrine gift shop.


The Lourdes Shrine at Assumption Grotto is the oldest outdoor Marian shrine in Michigan and was formally dedicated on May 29, 1881. One year later, Pope Leo XIII signed a proclamation authorizing the Detroit shrine for devotions and granted partial and plenary indulgences for all who visited the shrine at Assumption Grotto Church and prayed for the propagation of the faith. This privilege remains.


Much of the beauty of the Detroit shrine is in its makeup of imported limestone. Huge boulders around the shrine and in the cemetery were carried in by farmers from all parts of Michigan. Some of the stones and much of the limestone are inscribed with names and dedications that today provide a treasure of local history. In front of the shrine is a fountain with statues depicting Saint Bernadette of Soubirous’ vision of the Blessed Virgin Mary.


The Assumption of the Blessed Virgin Mary Church is the second oldest church in Detroit and is more commonly known as Assumption Grotto Church because of the Lourdes Shrine. The church is designated as a Michigan State Historic Site and is listed on the National Register of Historic Places.


Wednesday, August 15th is a Holy Day of Obligation for Catholics. It is the Feast of the Assumption of the Blessed Virgin Mary and historic Assumption Grotto Church in Detroit at Seymour and Gratiot Avenue will be celebrating the feast from early morning into the evening.
One of the high points of the day is a spectacular candlelight procession along Gratiot and into the cemetery to the Lourdes Shrine after the 7 p.m. Mass... [continue reading "Grotto" at Catholic Lane]


See details and schedule for August 15 at Assumption Grotto via the parish homepage.  You will not only find Mass, Confession, and devotion schedules, but shuttle information.  There is also a dinner until early evening.

There is some mistake in the schedule about the evening Mass where it reads that it is a Solemn High Mass with Fr. Perrone, "and concelebrants."  I can assure you, that last part in quotes is a copy/paste error carried over from when the evening Mass used to be celebrated with new Missal.  Since Summorum Pontificum, the 7:00 PM Mass has always used the 1962 Missal, and has been a solemn high with small orchestra and choir.   It is outdoors at the Grotto (weather permitting).  In fact, usually the 9:30, Noon and 7:00 PM Mass are all outdoors if it is not raining. 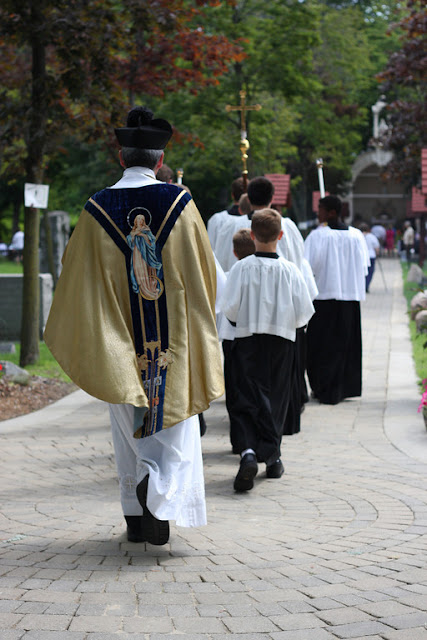 I regret that I will be unable to attend and photograph events this year due to personal reasons.  I will be there very briefly at one point during the day, but that is all I can give this year.  Hopefully, I will be back photographing next year.

If anyone does take pictures, please know that Fr. Perrone has a strict rule about not using flash during any liturgical events.  We should never draw attention to ourselves during the Mass.  The center of action is at the altar and when we are out there flashing away, it distracts others.  So, by all means feel free to try to get some pictures, but don't distract others from their prayer (and respect the pastor's wishes).  I might be able to post pictures taken by others from the day, but it may take a week or more before I can get to them.

Regular Grotto-goers know not to wear shorts and tank tops to the parish.  There are signs posted in the vestibule and on the side-wing tables that people should be dressed modestly (and Fr. Perrone does not consider shorts modest for worship).  Consider the priests who are fully vested.  No one can be hotter than they, so .... offer it up - LOL.

When down at the Grotto, people should consider the many who await this day to enter profound prayer with the Blessed Mother, and with Jesus in the Eucharist.  During parts of the day, the Eucharist will be reserved in the tabernacle at the outdoor grotto.  If you have ever been to Mass at Grotto, you will experience the most profound silence in the parish church whether you are there 45 minutes early or 5 minutes early for Mass.  It's as if no one is there.  People are not "stuck-up."  They are using the time to speak to God, and hear Him, in His own language: Silence.  Signs will be posted down by the Grotto urging silence, so please respect this.   If someone wants to converse, politely ask them to follow you out of the area surrounding the Grotto where others will not be interrupted from their prayer.

Note: The recommended links below are automatically generated by the tool, so they are not necessarily related content.
Posted by Diane Korzeniewski at 5:35 PM