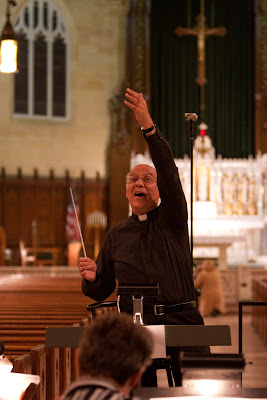 As a member of the Assumption Grotto Choir, last night was both euphoric and historic.

The Assumption Grotto choir got a real treat last night at the dress rehearsal for the Christmas season orchestral Mass.  We got to hear the full, roughly 40-piece orchestra as we sang a classical Mass composed this past summer by our pastor, Fr. Eduard Perrone.   We had only heard piano and choral voices since October when the music was first handed to us.  The musicians, the soloists, and the 60-65 voices brought to life something that was unimaginable to us when rehearsing it all this months.

It is moving and uplifting at times while serene at others, and fully majestic at strategic points.

Each year we are given a composed Mass set by one of the greats: Hadyn, Mozart, Schubert, Stravinsky, etc.   We wondered as summer came to an end who the composer would be, only to learn Fr. Perrone had composed his own Mass.  A couple of weeks ago, Fr. Perrone talked about his composition in a letter to choir members, which I posted here.

You have a chance to be a part of this historic moment in Detroit, and in the world of Catholic sacred music.  It will premiere at the midnight Mass (at midnight) at Assumption Grotto in Detroit.  Prelude music begins 15 minutes before.  It will be featured again at the 9:30 AM Mass on New Year's Day, an one last time at the noon Mass on January 8th, 2012.

The midnight Mass will be a solemn high Mass in the extraordinary form.  It is a traditional Latin Mass using the 1962 Missal.  If you have a Missal you will want to use the "First Mass at Midnight" for Christmas.  Here is a version online you can print.  I'm hoping we will have some sheets available, but it is good if you can bring your own to be sure.


The obedient are not held captive by Holy Mother Church; it is the disobedient who are held captive by the world!
Note: The recommended links below are automatically generated by the tool, so they are not necessarily related content.
Posted by Diane Korzeniewski at 11:29 AM