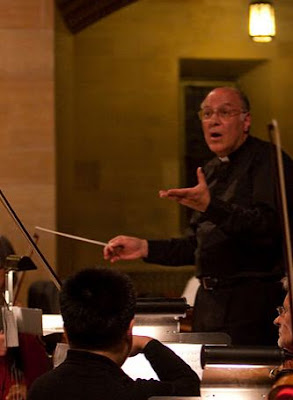 There are orchestral Masses several times yearl at Assumption Grotto, the Christmas season no exception.  What is exceptional this season, is that Grotto's pastor has composed his first Mass for choir, soloists, and orchestra.  It will be heard at midnight Mass for Christmas (and midnight Mass is always at midnight at Assumption Grotto).  You can see the Mass schedule for the season and the three opportunities to hear it in the context of holy Mass, in this post.

This past Wednesday, Fr. Perrone gave some notes to the choir about the composition.  I asked him if I could share it with my readership.  Yesterday, I received the electronic version with permission to upload.  Here is that letter to the choir.  I have added one link to the bio of Paul Paray, whom he mentions.


December 7, 2011
Vigil of the Immaculate Conception


I wanted to jot down some thoughts about the Mass I composed during my July vacation because I think that understanding the music better will help you in performing it.


Let me say first that composing an orchestral Mass is a daunting project in view of the illustrious composers who have written in this form. I decided to have a hand at it for two reasons: from the encouragement given by some people and by my desire to give something to honor the Mother of God, like the offering made by the juggler before the image of Notre Dame. It’s my belief that the Virgin Mary is the most beautiful of all God’s creatures in view of the fact that God chose Her for the Incarnation of His Son. All created beauty, in my view, must then be a participation in Her unparalleled beauty which is reflected in the many great works of art which Her beauty has inspired. I wanted therefore to make my own contribution, however small, to this vast cultural treasure. For this reason I dedicated it to Her under the title Fountain of Beauty.

********************
KYRIE ELEISON
The musical idea for writing this movement came several years ago. I jotted the opening theme down at once and later tried (unsuccessfully) to develop it. I then abandoned it, though that melody stayed with me. There are the two climactic moments, at bars 34 and again at 41. Paul Paray gave me the idea of having the orchestra play the opening melody of the Kyrie (following the Christe section) while the choir sings a descant over it. I wanted this movement to be as lovely an offering as I could make for the Virgin Mary.


GLORIA
The opening of the Gloria is grandiose, rather like music for an epic film, in order to depict the glory of God. The et in terra pax theme is decidedly Italian romantic music, Puccini-like. The sunny gratias agimus music recalls Paray’s Mass even though it is not a copy of it. The character of the piece changes considerably from bars 100 and following because it is the recognition of our sins which plead for Christ’s mercy. You may note that the plaintive melody of the flute here (and later of the clarinet) is the tune of the opening Gloria but in a minor mode, as if to indicate that sin detracts from God’s glory. Quoniam tu solus is an abrupt shift, extolling Christ as the Lord. The Trinitarian fugue of the Cum Sancto recalls Bach somewhat (in the contrapuntal writing of the music) with some modern harmonies. This section of the Gloria has the most involved orchestral writing and promises to be a real challenge for us in rehearsal. At 215-220 there is only one monotonous chord, driving the piece to a somewhat frenzied breakout of praise at 221. The closing fanfare for the orchestra uses the fugue theme in a brief canon.

CREDO
The music is straightforward, befitting a profession of belief, for which reason also it is formulaic so that many of its musical phrases are similar. There’s only a little word painting in invisibilium (where the music becomes soft) and the descending line for the descendit music for the coming down of God in the Incarnation. The et incarnatus, at the heart of the Credo has music which is tender, in contrast to the relentless tug of the opening music. The tone darkens appropriately at the mention of the crucifixion and burial of Christ. The et resurrexit and last judgment music is triumphal. The concluding section returns to the creedal declaration of the opening, and there is a perfunctory Amen, omitting the customary fugue for the et vitam text.


SANCTUS
Two ideas are set forth in this music: it addresses the Lord of Armies (the meaning of Sabaoth). This then is martial music but with an insistent drive that portrays the fullness (pleni sunt) of heaven and earth in the singing. The fugue is meant to give the idea of the whole universe involved in the acclamation.


BENEDICTUS
This movement is basically a duet for soprano and tenor, the idea being derived from Paray’s Mass. This is unabashedly romantic music to convey the idea of the blessedness (benedictus) of Christ who has come in the Holy Eucharist.


AGNUS DEI
This text setting follows in the path of Gounod, Fauré, and Paray in that the Agnus Dei is a plea for mercy but in a loving appeal to the Lamb of God. The music is generally serene though with a strong and subtle underlying rhythm. There are moments when the pleading becomes more intense (miserere) but the original, serene mood always returns. The brief reprise of the Gloria music for bars 95 and following refers to the word ‘peace’ which is found in both movements (the promised peace–pax–in the Gloria, and its delivery by Christ in the Mass–the pacem of the Agnus Dei). This device also serves to unify the music of the Mass.


I hope these few comments will increase your understanding of this music.


The obedient are not held captive by Holy Mother Church; it is the disobedient who are held captive by the world!
Note: The recommended links below are automatically generated by the tool, so they are not necessarily related content.
Posted by Diane Korzeniewski at 7:06 AM