Dear Father: You are cordially invited... 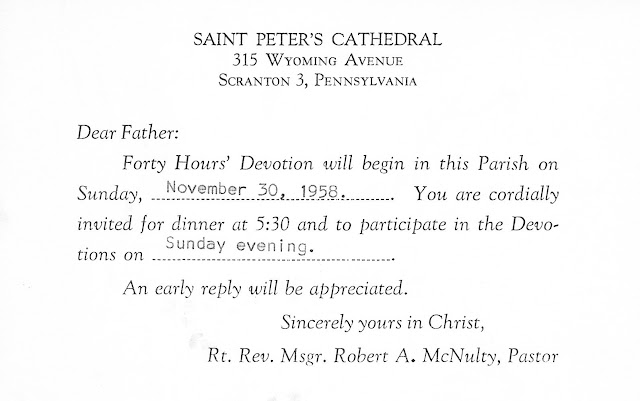 I purchased a used book on moral theology by Thomas Slater, SJ and it came with a few interesting things inside, including a card, scanned and embedded above.

Pope John Paul II did a lot to revive Eucharistic adoration.  Pope Benedict XVI has carried that on, always having a brief period of exposition during events like World Youth Day.

I knew nothing of regular adoration until I got to Assumption Grotto in May of 2005.  Not only was there an adoration chapel in the convent on the grounds of the parish, but the First Friday of every month, it would take place in the parish church.  In November of 2005, I experienced my first Forty Hours Devotion at Grotto.  It began on a Friday in November following the morning Mass until about 9 pm and it repeated again on Saturday.  On Sunday we would have a pancake breakfast by the ushers to hold people over until the big closing ceremony at 3:00 pm.

I am very optimistic, given the renewed popularity of Eucharistic adoration, that in a matter of time we will see the JPII and B16 generation of priests bring back the practice of 40 Hours Devotion from the proverbial "Smithsonian" to which it had been rendered.

I hope groups of pastors will get together and participate with their parishioners in one another's closing ceremonies.  To see the Body, Blood, Soul and Divinity of Our Lord Jesus Christ in the Most Blessed Sacrament given such devotion only increased my love for the Eucharist.

I know many faithful would like to see this happen as they learn about it, and I'm sure there are seminarians and young priests who would like to someday make it happen.  Patience and prayer are key.  If God so desires it, no one will be able to stop it.

If there is a priest out there wanting to do this in your parish drop me a note and I'll connect you with one pastor who has does it yearly. ;-) 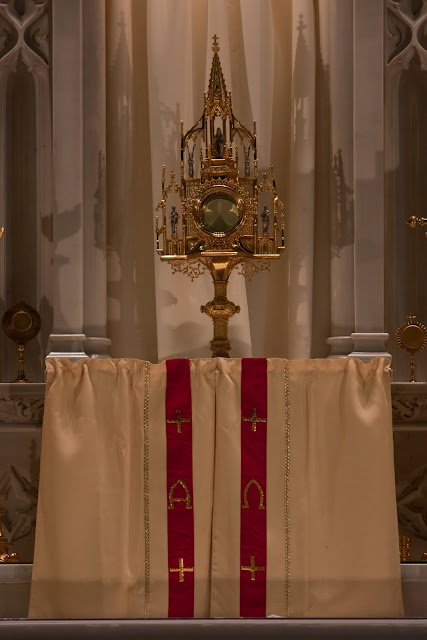 
The obedient are not held captive by Holy Mother Church; it is the disobedient who are held captive by the world!
Note: The recommended links below are automatically generated by the tool, so they are not necessarily related content.
Posted by Diane Korzeniewski at 2:04 PM