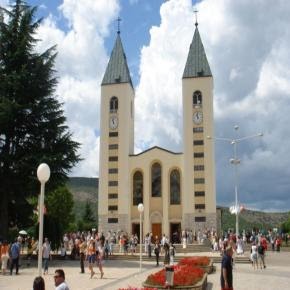 There is an interesting commentary by Francis Phillips at the UK's Catholic Herald entitled, Medjugorje is generating what the Devil loves most: disobedience.

It's not just disobedience, but also division at every level of the Church.  There has been a complete rupture in how visionaries of unapproved apparitions are treated by bishops in other dioceses.  Prior to Medjugorje, no bishop would think of allowing visionaries to have "apparitions" in his cathedral unless it were approved.  This had a solid basis.  Hosting seers of unapproved apparitions on Church property lends credibility to them, leading people to believe they have been sanctioned, and opening the door to exploitation.

It's interesting to note that in the whole of Bosnia and Herzegovina and Croatia, the visionaries are not given a platform on Church property.  What does this say about collegiality when they are given a platform in diocesan cathedrals and parishes in the US, Australia, Italy, and other countries?  This has given way to disharmony at the highest levels of the Church, and that has caused further disharmony among the faithful, who must choose this bishop over that bishop.

In the history of approved apparitions in the Church, I can't think of a single one in which visionaries traveled to scheduled events around the world.  If you are going to an event involving a Medjugorje visionary, chances are that it is happening in the evening and at 6:40pm, Standard Apparition Time (SAT), there will be an "apparition".

I have watched some of these streaming online.  As I looked at how packed those cathedrals were, with not even any standing room left, I couldn't help but wonder if people would come together in such numbers if the cardinal or bishop were to schedule a public Rosary or Eucharistic Adoration.

As I explained in one of my comments at the thread, I recall the anti-Marian sentiments in the culture of my childhood parish (and this was fairly common in the West).  Most who grew up in the 60's, 70's and early 80's never experienced Eucharistic devotion outside of the Mass.  Adoration, processions, and 40 Hours Devotion were all common before that time, but - like the Rosary - were wrongly suppressed by pastors and others who discouraged these practices, or by neglecting to foster them.   At the same time, Sacramental Confession was downplayed, and discussion of sin from the pulpit came to an end. Vocations declined right along with the loss of these things (and where they are fostered by pastors and bishops, they are booming).

Interestingly, when I went to Herzegovina in 1980, before the alleged apparitions began, I found there was devotion to the Eucharist and to Mary, and Confession was valued.  It remained intact through those years that were so turbulent in many other continents and countries.  Is it any wonder that when pilgrims discovered these things in the 80's and beyond, that they would gravitate to them?  After all, they do not belong to Medjugorje, but to the treasury of the Church.  The fact that people have found these things helpful, whether they understand how graces come through them or not, is not surprising.  They are time-tested and true.

I don't know about you, but I cannot wait for the Holy Father to answer the many questions we all have about Medjugorje.  Eucharistic and Marian devotion, as well as frequent Mass attendance, regular Confession, challenging homilies, fasting and other forms of mortification belong to the treasury of the Church.  Let no one assume that these things can only be practiced in the context of Medjugorje.

One question always asked of me, is how there could be so many conversions and vocations if it were not authentic (by their fruits you shall know them).  First, there are both good and bad fruits, and all need to be measured.  However, as to conversions and vocations, if there is fraud or diabolical involvement, we defer back to Romans 5:20, which says where sin abounds, grace increases.

In our midst right now, we are witnessing this with the Legionaries of Christ.  The disgraced Maciel, referred to as a "false prophet" by Pope Benedict XVI, founded a community which, as of 2010 had 800 priests and some 2500 seminarians.  If Maciel was a "false prophet", how did we get all of these good fruits?  Answer: Romans 5:20.  An all-loving God always wins!

As always, the comment box, at 98 posts as of this writing, is yielding quite the discussion.  Go read Medjugorje is generating what the devil loves most: Disobedience.

The obedient are not held captive by Holy Mother Church; it is the disobedient who are held captive by the world!
Note: The recommended links below are automatically generated by the tool, so they are not necessarily related content.
Posted by Diane Korzeniewski at 1:07 PM