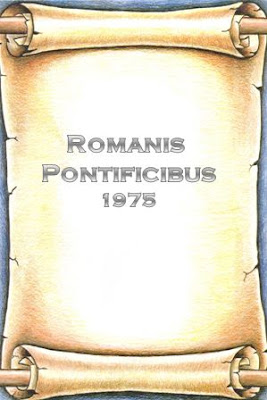 It concerns the distribution of parishes between Franciscans of the Herzegovina Province, and diocesan clergy of Mostar-Duvno as laid out in the 1975 decree, Romanis Pontificibus.  The name of the decree has been discussed, but in the English speaking world we have not seen the actual document, until today. This is not so much a conflict between those local franciscans and the local bishop, but a matter between members of that province of franciscans and the Holy See itself.

It should be noted, that most franciscans have been cooperating.  Others, however, resisted unto usurping - quite forcibly - several parishes in the late 1990's, ultimately leading to their removal from the Order of Friars Minor, and "a divinis" suspensions.   On February 20, 1999, Romanis Pontificibus was definitively implemented by the then Vicar General of the OFM, Br. Stefano Ottenbreit and Msgr. Ratko Peric of Mostar-Duvno. The Papal Nuncio at the time, Msgr. Mario Cassari, represented the Holy See.

Still, a number of Franciscans of the Herzegovina Province refused to sign a declaration of obedience, incurring other penalties.  If you scroll down in this google translation of the page dedicated to the "Herzegovina Case" at the diocesan website, you will see the nine who were removed from the Order of Friars Minor and suspended, and another 23 names suffering other penalties (toggle to Croatian in the upper right hand corner to see untranslated names).  Jozo Zovko, OFM, well known in Medjugorje circles, is listed 23rd.

It is helpful to see these numbers today, as you read what is below.  Using data from pages at the diocesan website, I know in Mostar-Duvno, the Franciscans of the Herzegovina Province are responsible for 30 of the 66 parishes, with the rest in the hands of diocesan priests.

Bishop Peric is also the apostolic administrator for the ancient diocese of Trebinje-Mrkan, which has 16 parishes run by 32 diocesan priests (the franciscan custody does not reach into Trebinje-Mrkan).

The 1975 Decree Romanis Pontificibus is now available in two translations at the Diocese of Mostar-Duvno:  [English] [Croatian]

I would like to suggest that this document could be of interest to anyone who is not famliar with the situation in Bosnia and Herzegovina.  The first half of the decree goes through a kind of catechesis - drawing heavily from documents like Lumen Gentium and Christus Dominus on the role of the bishop.  It gives us a view into how areas transition into the form of functioning dioceses most of us live in today.  This part of it, I found very informative. We take for granted the governance of our dioceses and how they grow over time.

Here, you learn about the powers of the bishop, and the wishes of the Holy See with regards to settling diocesan clergy into parishes once an area begins to emerge from missionary status.  This decree doesn't neglect to speak about the great good the Franciscans have done for centuries in that region, but it is not the norm for a religious order to have administrative control of most parishes in a diocese.   In fact, the decree generously allows the Franciscans to retain half of the parishes - something which probably does not exist in any other part of the world.

It has been noted by Bishop Ratko Peric in an interview with "Crkva na Kamenu" (Church on the Rock), the difficulty some have in accepting diocesan clergy.  Here is Bishop Peric discussing what he told the Holy Father in his 2006 ad limina visit:

The third category corresponds to nine members who are not only disobedient, but who have also been expelled from the Franciscan Order and suspended from all liturgical activities, through their own fault and responsibility. They behave though, as if nothing has happened and have usurped five parishes and continue to create havoc and ecclesiastical chaos in some other parishes as well. Along with the adherents they have gathered for themselves, they have created a schism, a division, which is not so much a schism of intellectual as it is of an affective nature.

These faithful for instance, do not accept “Don (father) Luke” but only “Fra Luke”, no matter how much the General of the Franciscan Order declares that this Fra Luke is no longer a Catholic Franciscan and despite the fact that he has been expelled from the Order due to his obstinate disobedience and schismatic attitude towards the Pope, the General Curia of the Order and the local Church. Whatever these nine do is done illegally or against the Church, and therefore the sacraments of confession, confirmation and marriage they administer are invalid. All the Church documents they issue are illegal and invalid, since they are not authorized to do so. They have even established their own association, through which they aim to pressure those responsible in the Church to act according to their disobedience and schism.

After you are famliar with the 1975 decree, it is also worth reading a homily delivered some months ago by the papal nuncio in Bosnia-Herzegovina, Archbishop Alessandro D'Errico.  It was on the occasion of the naming of Marko Semren, OFM, of the Bosnia Province of Franciscans, to the rank of auxiliary bishop in Banja Luka [bah-nya loo-kah] - the first Franciscan to hold the rank of bishop in decades in Bosnia-Herzegovina.   In Archbishop D'Errico's homily, given on the feast of St. Bonaventure,  he articulates clearly the Holy See's desire for unity among diocesan priests and those in religious orders.  He does this first by speaking about the need to be united with the institution of the Church through the diocesan bishop.  The first two-thirds of the homily deals with St. Bonaventure which was an awesome read on it's own.  That first part of the homily also gives us context for what he says near the end.  I can't say with certainty that this is related to Romanis Pontificibus because he does not mention it specifically.  But the language used over several paragraphs seems to point in this direction.

What does this all have to do with Medjugorje?  Let's look closer again at the words of Bishop Ratko Peric, this time from a position he updated in 2007: Međugorje: Secrets, messages, vocations, prayers, confessions, commissions.

In the diocese of Mostar-Duvno there exists a problem which in recent years has practically become a schism. At least nine Franciscan priests, who have been expelled from the Franciscan OFM Order and suspended a divinis, have rebelled against the decision of the Holy See and have not allowed the transfer of some of the parishes from Franciscan to Diocesan administration. They forcefully occupy at least five parishes, all the while continuing with all priestly functions. They invalidly perform marriages, hear confessions without canonical faculties, some of them invalidly confirm youngsters, and in 2001 they invited an old-Catholic deacon who falsely presented himself as a bishop to “confirm” about eight hundred young people in three parishes. Two of these expelled Franciscans even went as far as asking the Swiss old-Catholic bishop, Hans Gerny, to ordain them as bishops, yet they did not succeed. So many invalid sacraments, so much disobedience, violence, sacrilege, disorder and irregularities and not even a single “message” amongst the tens of thousands of “apparitions” has been sent to alleviate these scandals. A very strange thing indeed!

That is a good point Bishop Peric makes in the end: Why doesn't the "gospa" of Medjugorje seem to care about all of the invalid sacraments taking place a stone's throw away by a number of ex-franciscans without faculties?  As an aside, Bishop Peric had to inform those 800 young people, and their parents, that their confirmations were invalid.  He then administered the Sacrament to them.

The length to which the "sacramental" chaos ensued, is described in greater depth in a 2004 document by Bishop Peric entitled, "The Truth Both Frees and Binds Us".

Considering that St. Francis would have given the cloak off his back if someone had asked for it, and had reverence for ecclesiastical authority, I cannot reconcile this behavior with authentic Franciscan spirituality.  St. Francis would not only have handed over the parishes to the diocesan clergy, he would have done so in such a fashion as to exhort the faithful to accept those priests as their shepherds.  From the "gospa", not a word of disappointment.

Acknowledgement
I want to thank  Edward N. Peters, JD, JCD, who is an instructor of Latin (among other things) at Sacred Heart Major Seminary in Detroit.  It is his translation work from the Latin, which appears on the Diocese of Mostar-Duvno site.

Opinions and thoughts expressed in this blogpost are my own and do not necessarily reflect those of Dr. Peters.

The obedient are not held captive by Holy Mother Church; it is the disobedient who are held captive by the world!
Note: The recommended links below are automatically generated by the tool, so they are not necessarily related content.
Posted by Diane Korzeniewski at 9:57 PM