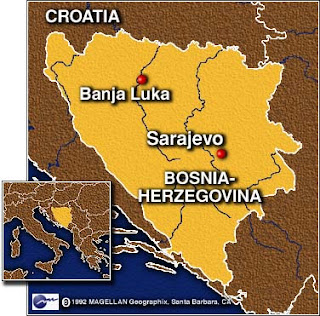 As one who lived in Herzegovina for just over 2 years, I have a habit of following not only Catholic news, but Catholic news from Bosnia and Herzegovina (BiH).  I don't report on all of what I see, but something happened this past week I would like to share because I think it is out of the ordinary.

First, a little background information will be helpful for this news.  The small nation of Bosnia and Herzegovina has three dioceses:  Vrhbosna {Sarajevo}, which is the metropolitan see with Vinko Cardinal Puljic (64) at the helm. It has the suffragan dioceses: Banja Luka, which is headed by Bishop Franjo Komarica (64), and Mostar-Duvno (and Trebinje-Mrkan). This  latter diocese, which is led by Bishop Ratko Peric (66), is where Medjugorje lies.  Until now, Vrhbosna was the only diocese with an auxilairy bishop, Pero Sudar (59) 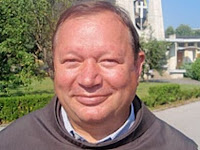 On July 15, 2010 - the memorial of St. Bonaventure (franciscan, bishop, doctor of the Church, and patron saint of Banja Luka), Fr. Marko Semren, O.F.M. was named an auxiliary bishop in Banja Luka by Pope Benedict XVI.  He will be the first franciscan bishop since the mid-1940's in BiH, when the last two (Mostar-Duvno and Banja Luka) were succeeded by men of diocesan lines, up to modern day (in 1997, Bishop Hil Kabashi, OFM was ordained from the province, but serves in Albania) .  I wondered from which province he originated, and quickly discovered that the Bosnian province was claiming him as one of their own (there is also a Province in Herzegovina).

I have a homily translated by the papal nuncio to BiH, Archbishop Allessandro D'Errico from the Cathedral in Banja Luka on the 15th, where he was joined by the country's bishops.  To allow for some background here and not make the post too long, I wanted to break it up into two posts.  Archbishop D'Errico offered a beautiful homily discussing the life of St. Bonaventure and putting it into some context for the people of that nation.  I found some of what he said quite striking.  It goes to unity in the local Church and he guides priests, religious, and laity in an interesting way.

News of his elevation was found on the home page of the main website for the Order of Friars Minor in Rome, to Dalmatia (Croatia), and even here in the sidebar of a US province

Worldwide, there are 113 franciscan bishops, and Bishop-designate Semren, OFM will end up being the 50th franciscan bishop to come out of the Bosnian Province in it's history.  Additional background shown on him here, is quite impressive.

You can read more about Bishop-designate Semren, O.F.M. through a google translator at the Bosnian province website.  He is considered an expert on the history of Franciscans in Bosnia-Herzegovina, which is rather quite a fascinating subject in itself (I got some limited background through an excellent little book by Ivo Sivric, O.F.M. called, Peasant Culture of Bosnia and Herzegovina

(c 1982).  It is probably one of the only places in the world, outside of unsettled missionary territory, with a high number of franciscan-run parishes. There is a rich and long history, and the bond the people have with the franciscans is noteworthy as it was presented in Fr. Sivric's book, and by my own personal experience when I lived there.  Perhaps someday, books written by Semren will be translated for others to study.

Most Croatian parishes here in the US with which I am familiar, are franciscan-run, and they have their base in Chicago.  Using data from pages at the diocesan website, I know in Mostar-Duvno, the franciscans are responsible for 30 of the 66 parishes, with the rest in the hands of diocesan priests. Bishop Peric is also the apostolic administrator for the ancient diocese of Trebinje-Mrkan, which has 16 parishes run by 32 diocesan priests (the franciscan custody does not reach into Trebinje-Mrkan).

NUMBERS
There's a reason I'm going to drop these numbers out so stay with me...

Why these numbers?  It's interesting to see an auxiliary appointed to the smaller of the dioceses, yet Banja Luka was not without an auxiliary bishop in the past.  Bishop Komarica himself was an auxiliary for several years in that diocese before taking the helm.  The Holy See may have long range plans, and knows the needs of each individual bishop.  As noted earlier, all of the BiH bishops are in their mid-sixties, still fairly young from an episcopal standpoint, but each of these men have lived through the terrible, physical and emtional effects of war (1992-1995) and the challenges that followed.  Bishop Komarica is also the Bishop's Conference head, so an auxiliary bishop will help spread the load while allowing the new bishop to get some well-rounded seasoning assisting the current Banja Luka ordinary.

Ethnic/Political Challenges facing the Bishops of BiH
Many people hear Bosnia-Herzegovina and they think about Medjugorje.  There is much more going on than these alleged Marian apparitions.  There is a sobering note about those numbers that I provided:  The total number of Catholics is probably lower today in 2010 than it was in 2004-2006 (I just didn't have ready access to current data).  BiH is made up of Serbians who are predominantely Orthodox, Croatians who are mostly Catholic, and a third group which some refer to as Bosniaks, who are Muslim.  Of course there are other groups, such as Jews, atheists, protestants, etc, but these are a distinct minority.  While some Catholics may have left the faith, the decline is largely the result of an geographical exodus to neighboring Croatia.  Bishop Peric stated in April of this year:

The Datyon agreement following the war of 1992-1995 basically had the effect of what I will call "institutional genocide".  Rather than divvy up the country politically into three parts, the Serbs were given half, and the rest was divided between the Croats and Bosniaks.  It doesn't take a university degree to see that over time, any one group with that much control would have an effect on the lesser groups.  If half the voting power goes to one group, how likely is it that members of the other two groups will get elected? This has had an impact on what kind of curriculum is dominated in schools, on television and radio, etc (things that affect the thoughts of people). Young Croatians raising children want them exposed to their rich cultural heritage, such as Croatian literary and historical works. Add to this the potential for employment discrimination among the lesser groups makes it easier Croatians to leave for Croatia where these concerns are absent.

I learned quite a bit from another book I will recommend if you can find called, MANY PROBLEMS LIE AHEAD Persecution of Croats in Bosnia and Hercegovina by the Worlds' (sic) Powers Speeches, Conversations, Reviews and Letters 1997-2004

.  It is a collection of speeches, conversations, letters, reviews, homilies, and letters by Bishop Ratko Peric.  While some Catholics disagree with him over his position on Medjugorje, most see him as a champion for Croatian rights in BiH, and rightly so.  The homilies presented in this book are profound which tell the plight of Croatian people during and after the war are well worth the read. He weaves the gospel and Catholic social teaching throughout.

The Holy Father, with the BiH bishops, want to preserve Catholicism in that region.  Please pray for these bishops, including bishop-designate Semren, OFM in his new role.

The obedient are not held captive by Holy Mother Church; it is the disobedient who are held captive by the world!
Note: The recommended links below are automatically generated by the tool, so they are not necessarily related content.
Posted by Diane Korzeniewski at 1:32 AM