Mother Angelica and Sisters: Consecrated to their Guardian Angels 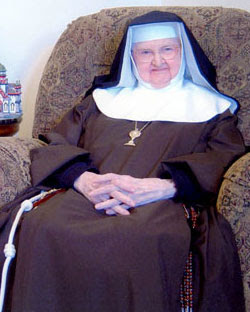 Anyone who knows anything about Mother Angelica, knows that she is close to the Holy Angels. "Our Lady of the Angels Monastery" takes it's name from her devotion to them. The beautiful chaplet of St. Michael which runs every morning on EWTN at 7:00am EST is also a clear sign of that devotion. Mother speaks about the angels in an excerpt provided by EWTN called, "Sons of Light".


For the past year, Mother and her community have been preparing for the Consecration to their Guardian Angels with the help of Opus Angelorum - an apostolate which we are blessed to have at Assumption Grotto. In fact, many in our own community have recently consecrated themselves after a year of preparation. More are preparing, including myself.

From the EWTN update page on Mother as it reads currently:

Mother has been spending most of her time in her cell, resting and living the Horarium as best she can. She is such a trooper. Life with Mother has been pretty quiet up until Sunday.

Sunday, December 2, 2007 was a very special day for Mother Angelica and her Community. After a year of preparation through the guidance of Opus Sanctorum Angelorum, a spiritual movement within the bosom of the Holy Catholic Church which aims at fostering an intimate collaboration with the holy angels for the glorification of God and for the sanctification (salvation) of souls, Mother Angelica and the Nuns consecrated themselves to their Guardian Angels. It was a simple ceremony within the Holy Sacrifice of the Mass, which Mother whole-heartedly participated in. It was clear by her joyful attention during the Mass and ceremony that she was deeply moved and grateful to make such a consecration. Mother Angelica has always promoted a deep love for the Angels and she passes on this devotion to her Nuns by her example.

If you would like to learn more about the Work of the Holy Angels please visit their website: http://www.opusangelorum.org/

The following is a consecration prayer taken from the OA website, approved by Rome in 2000.

The Consecration to the Holy Angels

O Holy Angels of God, here, in the presence of the Triune God and in the love of Jesus Christ, my Lord and Redeemer, I, N.N., poor sinner, want to make a covenant with you, who are his servants, so that in union with you, I might work with humility and fortitude for the glory of God and the coming of his Kingdom. Therefore, I implore you to assist me, especially - in the adoration of God and of the Most Holy Sacrament of the Altar, - in the contemplation of the word and the salvific works of God, -in the imitation of Christ and in the love of his Cross in a spirit of expiation, - in the faithful fulfillment of my mission within the Church, serving humbly after the example of Mary, my heavenly Mother, your Queen. And you, my good guardian angel, who continually behold the face of our Father in heaven, God entrusted me to you from the very beginning of my life. I thank you with all my heart for your loving care. I commit myself to you and promise you my love and fidelity. I beg you: protect me against my own weakness and against the attacks of the wicked spirits; enlighten my mind and my heart so that I may always know and accomplish the will of God; and lead me to union with God the Father, the Son, and the Holy Spirit. Amen.

The Congregation for the Doctrine of the Faith approved this Consecration prayer on May 31, 2000 for use in Opus Angelorum.© 2000 Congregazione dei Canonici Regolari della Santa Croce - Roma