Canonical Approval for Our Lady of America 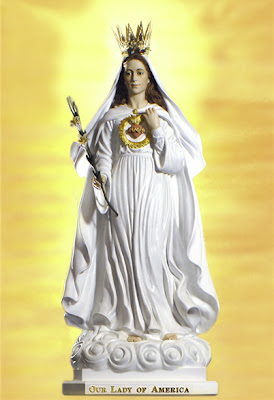 Amidst motu proprio news, followed by the CDF's clarification on Lumen Gentium, this news probably escaped many of us.

Canonical Approval has been given to Our Lady of America. It is based on the little-known private revelations of Sister Mary Ephrem (Mildred Neuzil) here in the US. They began in 1938 with mystical experiences which she brushed off as probably common to all religious. On the website Our Lady of America, there is an introduction to the messages she received, with a nihil obstat by the Archbishop of Cincinatti, Daniel Pilarczyk . Following that are the messages themselves.
This particular nun and private revelation enjoyed significant backing from Cincinatti Auxiliary Bishop and Vicar General of the diocese, Paul F. Leibold, who not only gave his imprimatur on the prayer, but authorized a medal to be stamped and plaques be made. This is highly significant in that such support from the bishop reflects approval of faithful following. But, it did not end there. 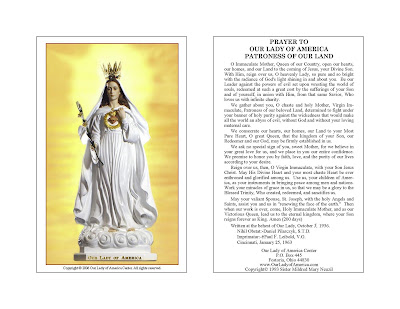 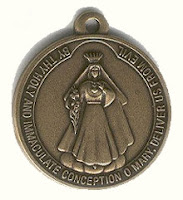 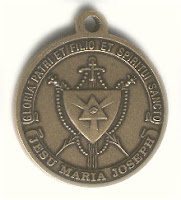 These are the kinds of things you want to look for before putting too much stock behind a private revelation.

In the messages, it becomes clear what the Blessed Mother wants:

On October 13, 1956, The Blessed Virgin Mary requested that a statue of "Our Lady of America" be enshrined in the National Shrine of the Immaculate Conception in Washington, D.C., as a special place of pilgrimage and a special safeguard for our Country. Our Lady promised miracles greater than those of Lourdes and Fatima if her children heeded her warnings and fulfilled her requests. She indicated that this would be accomplished through her loyal sons, the Bishops of the United States. It is to the fulfillment of these requests that this website is dedicated and it is to Our Lady of America that it is consecrated. Learn more... 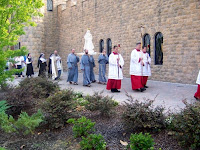 Her loyal sons have been responding. Skip forward to 2006: Our Lady of America processed at the Cathedral of Cheyenne Wyoming. This procession was with a statue of Our Lady of America originally made with the approval of Bishop William G. Connare of Greensburg, Pennsylvania (Deceased). On May 29th, 2006, the Statue was enthroned (on May 31), at the Shrine of the Most Blessed Sacrament - Our Lady of the Angel's Monastery in Hanceville, Alabama.

In November, 2006, Archbishop Raymond L. Burke had the statue displayed at the USCCB conference:

At 2:15 PM in the Concelebrated Mass Room, on November 15th, 2006, His Excellency Raymond L. Burke blessed this new statue. This occurred on the 50th Anniversary to the day of Our Lady's request to be enthroned in the National Basilica Shrine of the Immaculate Conception in Washington, D.C.

"What can be concluded canonically is that the devotion was both approved by Archbishop Leibold and, what is more, was actively promoted by him. In addition, over the years, other Bishops have approved the devotion and have participated in public devotion to the Mother of God, under the title of Our Lady of America."

Apparitions associated with Medjugorje do not enjoy this level of support because the local Ordinary has not given it his approval. He not only would not authorize devotions, statues, or medals - he explicitly prohibted them. The Vatican has authorized people to visit Medjugorje provided it is not considered a place of authentic apparitions - a position the Msgr. Henri Brincard of France spoke of as confusing to the faithful in his letter on Medjugorje in 2000.

Then, there is Bayside, which was actually condemned by the local bishop. Strangely enough, people still follow Bayside despite the position of the local bishop there as follows:

STATUS: On November 4, 1986, Bishop John Mugavero of Brooklyn made a public declaration regarding the "Bayside Movement." In part, this proclamation consist of:

1) "No credibility can be given to the so-called 'apparitions' reported by Veronica Lueken and her followers."

2) "The 'messages and other related propaganda contain statements which, among other things, are contrary to the teachings of the Catholic Church, undermine the legitimate authority of bishops and councils and instill doubts in the minds of the faithful..."

3) "Because of my concern for their spiritual welfare, members of Christ's faithful are hereby directed to refrain from participating in the 'vigils' and from disseminating any propaganda related to the 'Bayside apparitions.' They are also discouraged from reading any such material."

4) "Anyone promoting this devotion in any way, be it by participating in the 'vigils,' organizing pilgrimages, publishing or disseminating the literature related to it, is contributing to the confusion which is being created in the faith of God's people, as well as encouraging them to act againsy the determinations made by the legitimate pastor of this particular Church (c. 212, para. 1)."

With regards to Our Lady of America, the faithful are free to pursue devotion and propogate the messages based on the canonical approval for which Archbishop Burke speaks. This is why he himself is actively promoting Our Lady of America.

This the small, but growing devotion to Our Lady of America also speaks for itself. It is not "in your face", but has been quiet, patient and humble like a beacon of light on a dark shoreline.

For more information, visit the Our Lady of America website.


Te Deum Laudamus! Home
Posted by Diane Korzeniewski at 6:28 AM