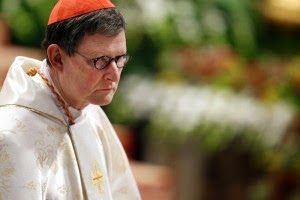 Yesterday, I saw a blog post by Patrick Archbold, at his personal blog, Creative Minority Report,  about a Catholic prelate in Germany entitled, "Putting the Homo-Heretics in Charge,"  I decided to do some digging into the matter to see if a controversial quote from the early spring of 2012 attributed to the Cardinal was authentic or a media-hack job that went viral.  I explained in my post yesterday, why I believe it is the latter.

In that post, I had not linked to Patrick's original blogpost, as I have above now, because I was hoping he might change the title.  But, after some discussion with him through private message last night, and with a public response by him to my post, I felt it was best to let people see his words and the justifications he is using since he is standing by his title, and his position on Cardinal Woelki.  We pretty much agreed to disagree and parted amicably.  I'm sure he is praying for me as I am praying for him.

Right now I'm interested in probing the issue deeper in order to see if we can get better clarity in the English language, and there is something worth sharing that was found late last night in German media.

A second interivew on the controversial issue with Cardinal Woelki


Last night, after my discussions with Patrick and editing my original post for further clarity on my understanding of the Cardinal's words based on a different translation of the diocesan spokesman than he had in his response to me, I went looking in German language press for more information.  I can't speak or read German so I am at the mercy of an auto-translator.  After many years of getting translations from Richard Chonak on various things, I've learned how easy it is to get the wrong idea about something said through an auto-translator, and even through other translators who have only a basic knowledge of the language.  I've seen people persecuted over things they didn't say because of reliance on auto-translators and on translations done by people with less experience in a given language.  So, that makes me cautious when I hear something about a prelate in another country.

I found some things last night and sent them to Richard Chonak.  First, I found that in 2011, Cardinal Woelki hit the hornets nest in Berlin when he first took over, causing a lot of anger in the local homosexual community.  Anger is an understatement.  The reason they were angry is because he had been very direct about Catholic teaching and homosexual acts.  Perhaps he wasn't clear enough that it was the acts he was speaking of, but in an interview in early 2012, he seemed to be trying to calm the storm.  You can read the hacked version of what the German media provided, and which spread to other countries, including the U.S. in the post I made yesterday.  You will find that the diocesan spokesman for Berlin stated that the Cardinal's words were, "severely truncated."  We all know how that can change the entire meaning of a statement, not just the context.

Richard was able to find the original source for an interview I saw discussed that happened with Cardinal Woelki about six months after the interview in early 2012.  The interviewer asks questions about that controversial quote and the Cardinal responds.  Richard Chonak, in his post, "What did the Cardinal Really Say?"  offers his translation of that part of the interview.  I would invite everyone to read it carefully, and ask if they really believe that this Cardinal is a so-called, "homo-heretic."  If he has fault in anything, it might be with the fact that he made a statement which could easily be misunderstood.

That same interview is discussed elsewhere in German media, but what prompted me to ask Richard to find the original is that they summarized part of what he said, then gave a quote, and I felt there was something  missing.  I was right.

The Cardinal gave examples in the original interview of what he meant when he said "recognizing the relationship."  If you read the full interview at Richard's blog, Catholic Light, the way I see it, he is distinguishing between judgment of sexual acts and judgment of acts of compassion, such as caring for another who is sick.  He mentions how we recognize the relationship, and respect the care given, by an adult child of an elderly parent.  He then points out that a homosexual person who gives such care to a dying partner is also something to be recognized.  Here again, he is not saying that we should recognize sexual activity, but the act of compassion of one human being giving care to another.  Putting this into my own example, if I see a self-avowed gay man pull someone from a burning house, it's not only okay to recognize that he put his life on the line, I should respect what he did as I would any other person who does not have same-sex inclinations.  By recognizing that heroic act, I am not condoning the homosexual life style.

Some will still take issue with this by continuing to interpret the entire set of words in the most damning way, rather than interpreting it in the most favorable way.  What does the CCC teach us about this?


Unspecific is not equivalent to endorsement


Richard points out something worthwhile at the bottom of his post:

Overall, it sounds like the bishop’s method is close to what the reporter thought: the bishop enunciates Catholic teaching clearly as applying to intra-Church matters; but he is unspecific about what society and the state should do. There is Catholic teaching against unjust discrimination toward homosexual persons, and perhaps the bishop is only calling for observance of that. But he gave no guidance about where the state should restrain itself in granting status to same-sex couples.


I thought the same about the part where he was unspecific, but being unspecific is not equivalent to endorsing same-sex civil unions.  That's just an objective fact, so let's be careful there.  God didn't gift me or anyone else with reading the Cardinal's soul to state why he is being unspecific and there can be many reasons, which includes the possibility that he does not quite know how to form the words without causing more confusing.  In time, he might get specific.

What we cannot do is invent dots where they do not exist to make a line go in a direction we think it is heading.  We cannot fill in blanks to fit a particular narrative.  And we need to question anything that puts a prelate or the pope in a bad light, whether we like it or not.

Part of the problem is that some are too quick to believe the most ridiculous things pedaled by a secular press that has proved over and again, it is willing to play with the words of our Holy Father and prelates in such a way as to change the meaning, and withhold the context. Sometimes this is done out of haste or ignorance of the consequences and other times it is done in order to further an agenda or narrative that is contrary to Catholic teaching.

I don't think the solution is to put the hierarchy into a dungeon and only let their words filter out through spokesmen.  As I pointed out yesterday, if Jesus had walked the earth today, no one would have had their words tinkered with more than him.  Maybe that's why he came into the world 2000 years ago instead of today.

While I take serious issue with using offensive language in reference to prelates who say something we believe to be in error, such as Patrick's headline, I understand how some of the confusion happened.  What matters is how we treat it going forward.


One thing I hope we can all agree on is that we can do much more good for the mission of the Church by praying earnestly for Cardinal Rainer Maria Woelki and for his diocese.  Do a Holy Hour for him.   There is no way to offend God by taking any anxiety or anger into Adoration and placing it on his shoulders. This not only helps us, it helps the Cardinal.  I recommend the same for the Pope and all clerics.  Catholics in ages past didn't have the internet to make them aware of every word and deed of the Holy Father, and bishops in distant places.  The Church did just fine without combox warriors berating bishops and the pope every time something controversial comes out.


NOTE: I've gotten some notes from people trying to comment.  Comments have been closed on this blog for several months.   Blogger does not seems to allow me to prevent you from typing out a comment then seeing it go nowhere.  If I hide comments, it hides all comments on every post.  It also does not allow me to put a time limit on how long people can post comments so I was moderating comments to posts that were years old.  On some posts, moderation can be time consuming and this was interfering with other things I needed to do. Blogger is a free tool which does have limitations.  My apologies for any inconvenience.

Note: The recommended links below are automatically generated by the tool, so they are not necessarily related content.
Posted by Diane Korzeniewski at 10:11 AM