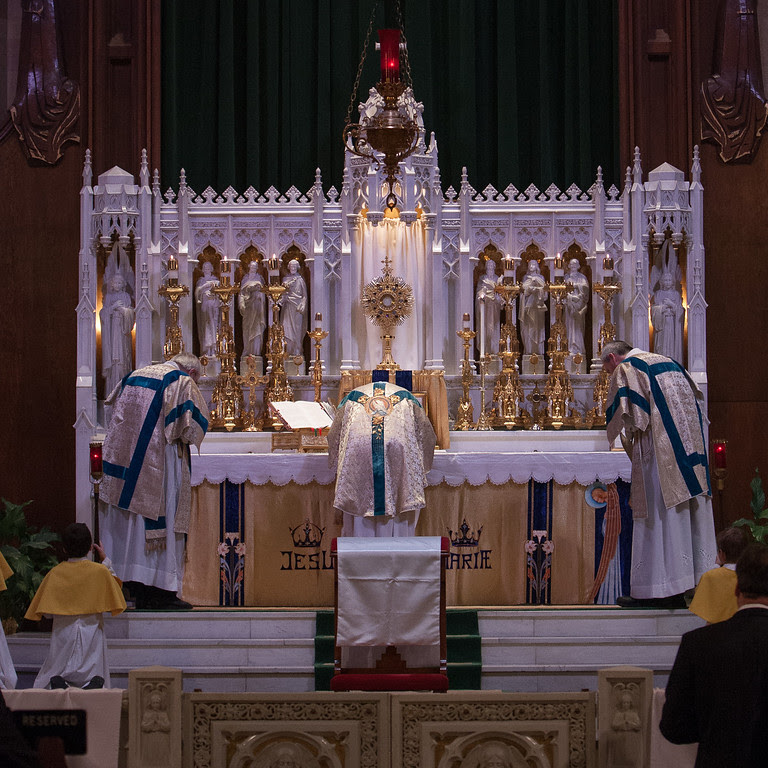 Yesterday, Fr. Perrone celebrated a Solemn High Mass (1962 Missal) -- a Mass of Deposition which closed our 40 Hours Devotion (see propers for Resumed Fifth Sunday after Epiphany).  This post contains video of his excellent homily on the hidden Jesus of the Host; as well as, photos and a few other video shorts, including the Eucharistic Procession at the end.

In these photos, it may seem odd to see the Blessed Sacrament on the altar in a monstrance during Mass.   Centuries ago, this was not an uncommon practice on feast days and special liturgies.  Joseph A. Jungmann, SJ writes in his book, Mass of the Roman Rite (1959, Benziger Bros):

Only the adoration of our Lord at the consecration retains it's position as the dominating climax.  Indeed, the adoration and glorification of the Sacrament, which had been so outrageously attacked by the Reformers, now stands so prominently in the foreground that one is almost bound to look upon the Mass in the general chiefly from this point of view. The catechism of J. M. Kettler which appeared at Wurzburg in 1734 treats the Mass as one of the five ways in which to worship Christ in the sacrament.  It is no wonder, then, that eucharistic devotion, especially the Forty Hours and the grand processions, vied with the Mass in splendor and in the fervor of attendance, and that in many countries it became the rule more and more to expose the Blessed Sacrament during Mass as an enhancement of the celebration, especially on feast days. This type of piety achieved at this very time its highest artistic manifestation and, at the same time, the proof of its power in the autos sacramentales of Spanish poetry.


Today, I think it is only in the context of a Mass of Deposition, closing 40 Hours Devotion, that you would see exposition like this.   The Blessed Sacrament was covered during the homily, which Fr. Perrone discusses briefly. 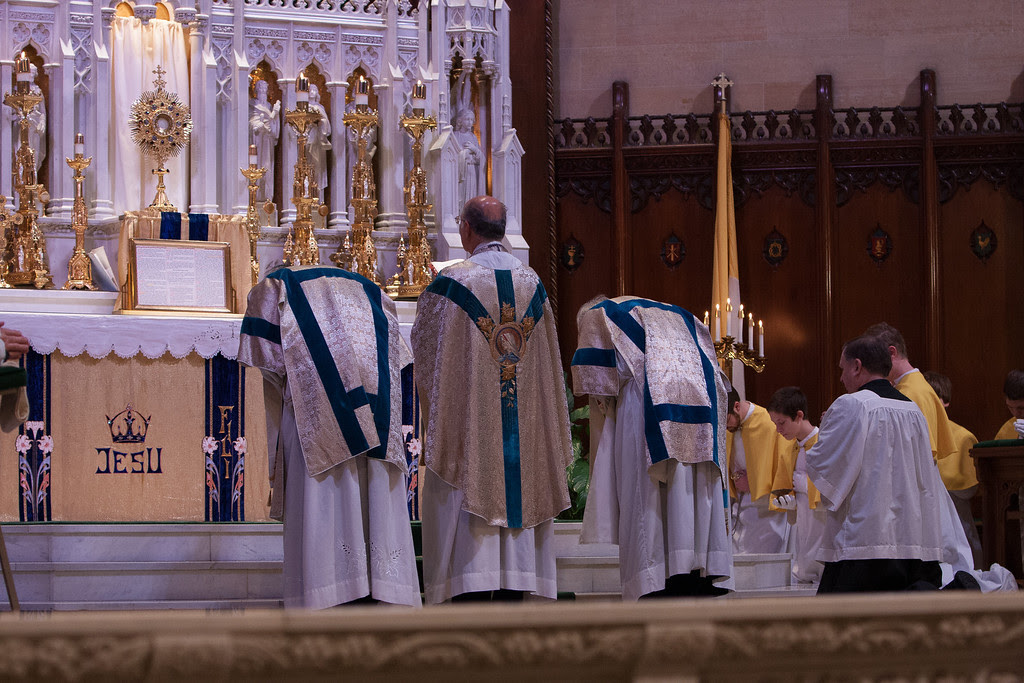 It is a long-standing custom at Asssumption Grotto for altar boys to wear these white cassocks and gold capes for Easter season, Corpus Christi, and for special liturgical events involving the Blessed Sacrament, like 40 Hours. 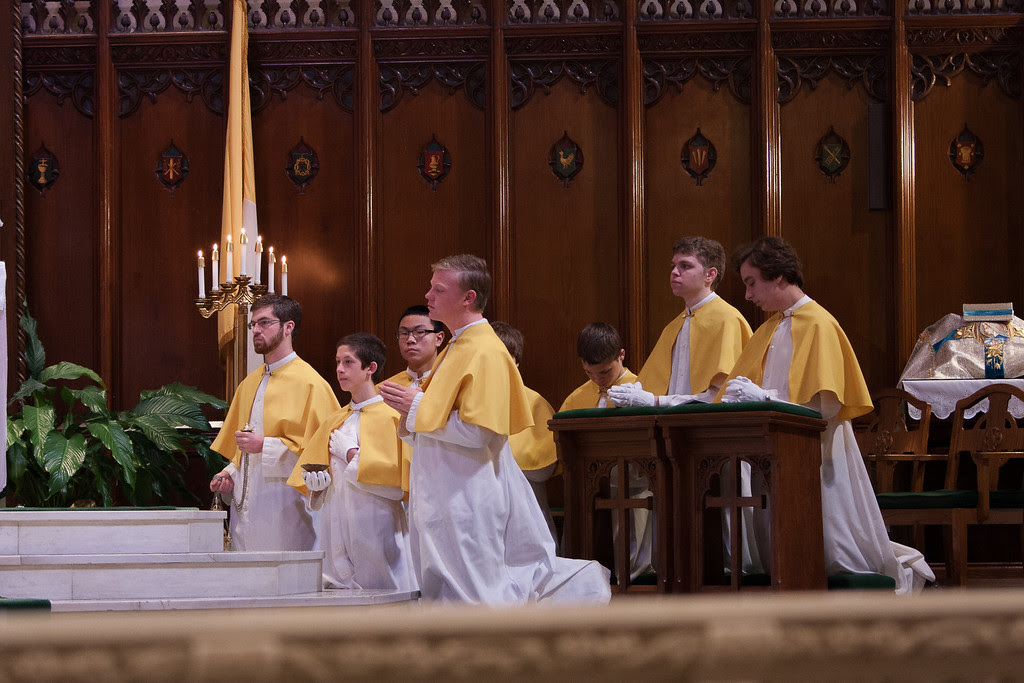 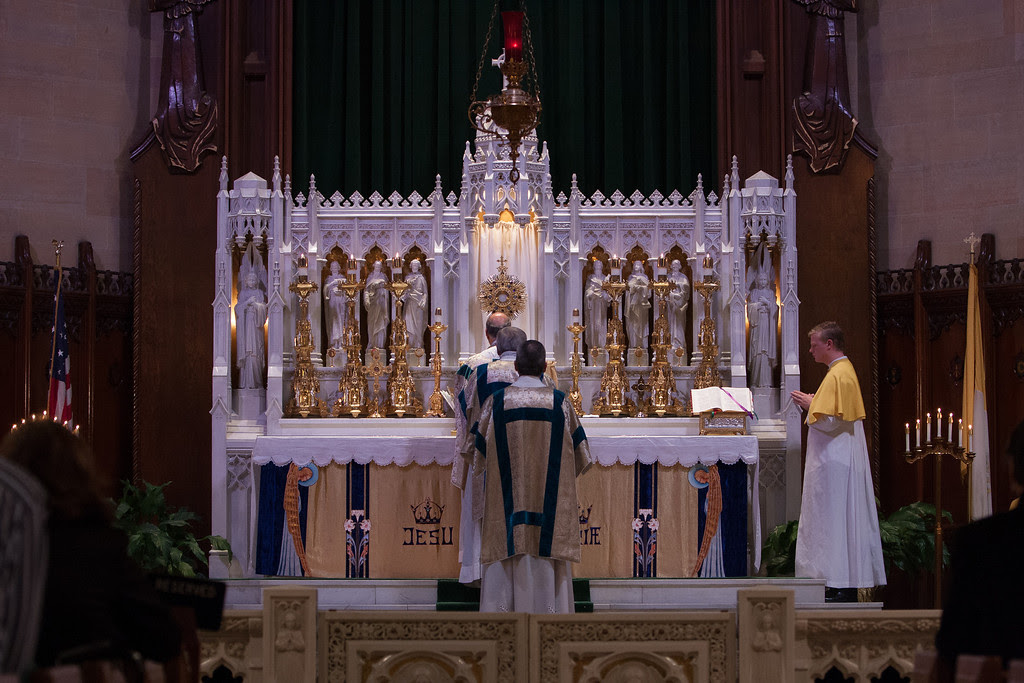 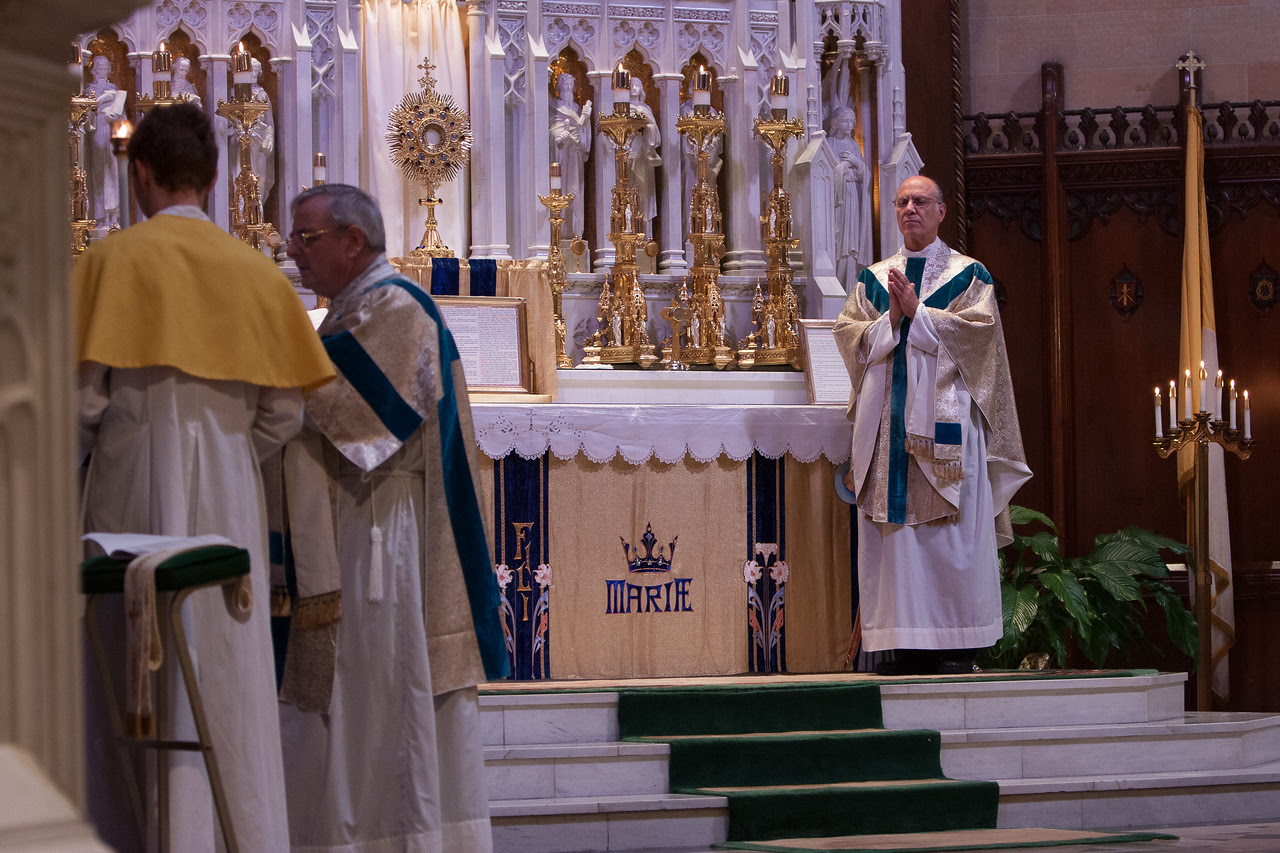 Here is Fr. Perrone's homily from the Mass.  Many have asked if it was available after hearing it.  In the background you see the Blessed Sacrament covered.


Incensing as we entered the Offertory 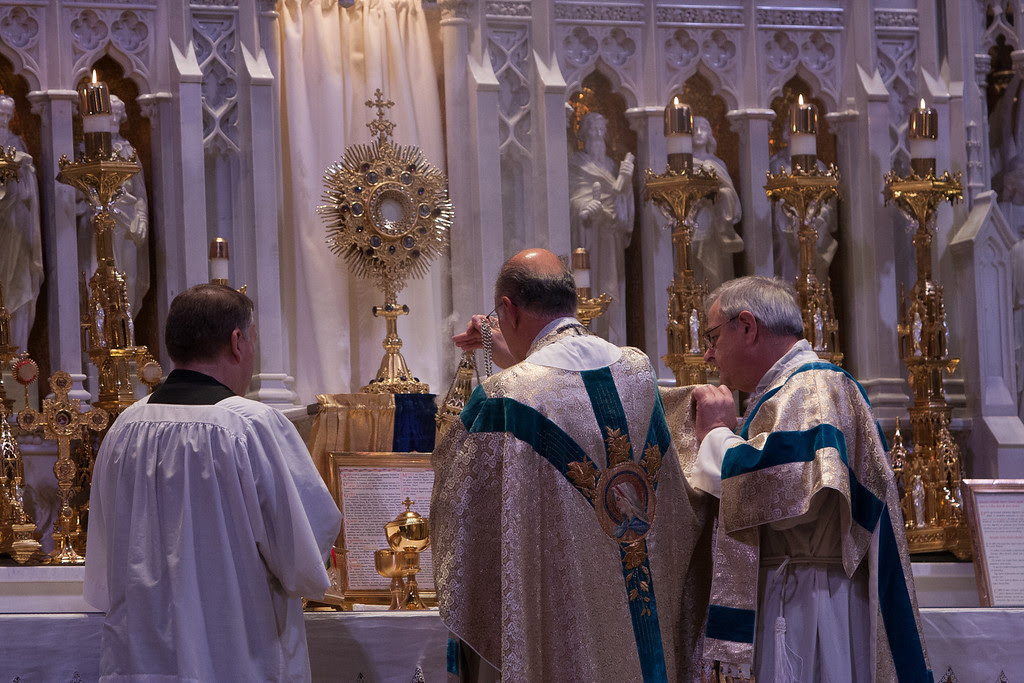 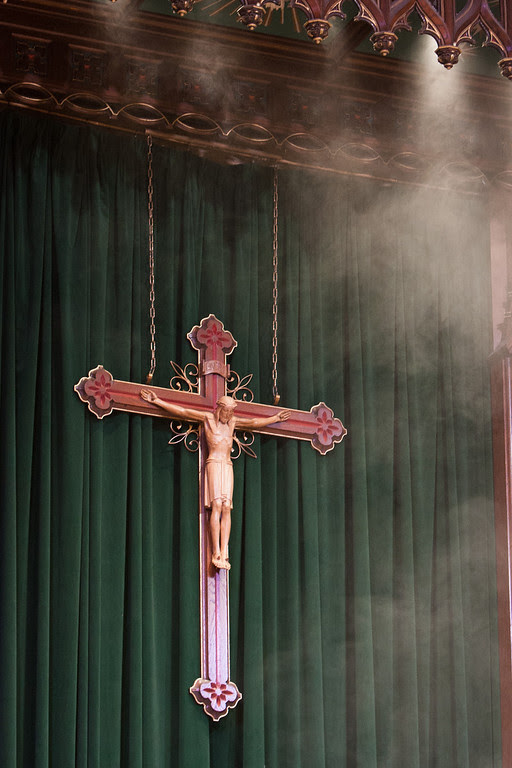 Fr. John Bustamante, serving as the subdeacon of the Mass, is using a humeral veil and holding the Paten until the Pater Noster.  You can see a brief explanation of this here. 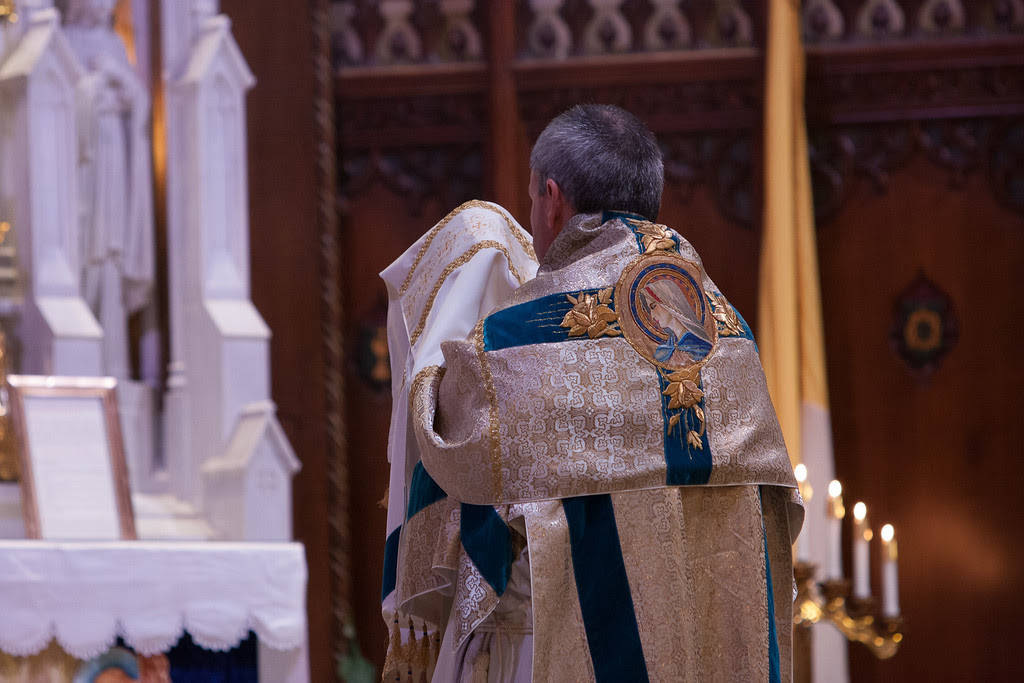 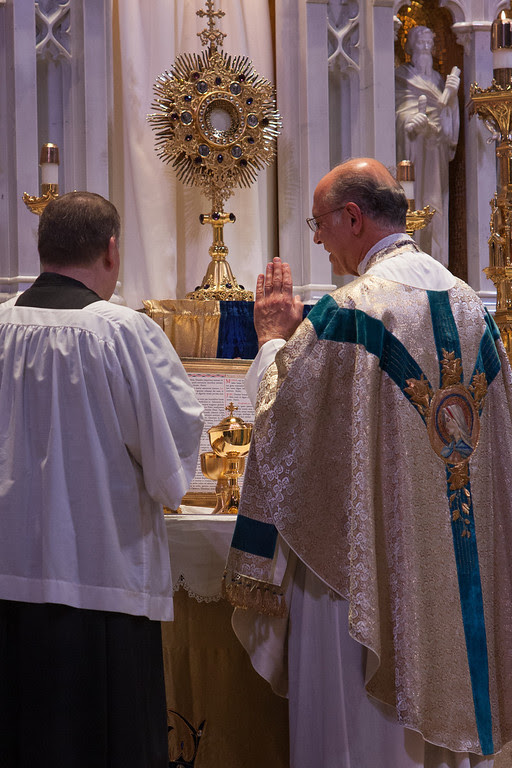 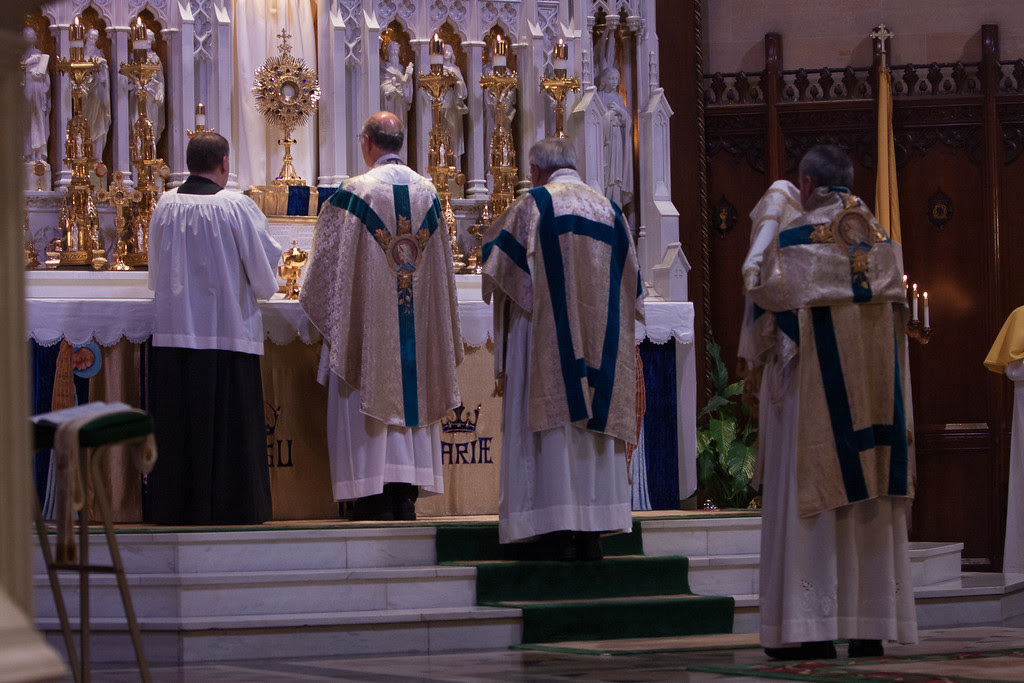 I recorded most of the Sanctus.  One of the things you will see here, just under a minute into the video, is an altar boy placing a "Sanctus Candle" on the altar - an old practice Fr. Perrone added back earlier in the year.  Here is something from the old Catholic Encyclopedia (keeping in mind it was written in 1908).

The rubrics of the "Roman Missal" direct that at the Sanctus, even of any privateMass, an additional candle should be lighted and should burn until after the Communion of the priest. This rubrichowever is much neglected in practice even in Rome itself.


The Elevation of the Consecrated Host and Precious Blood 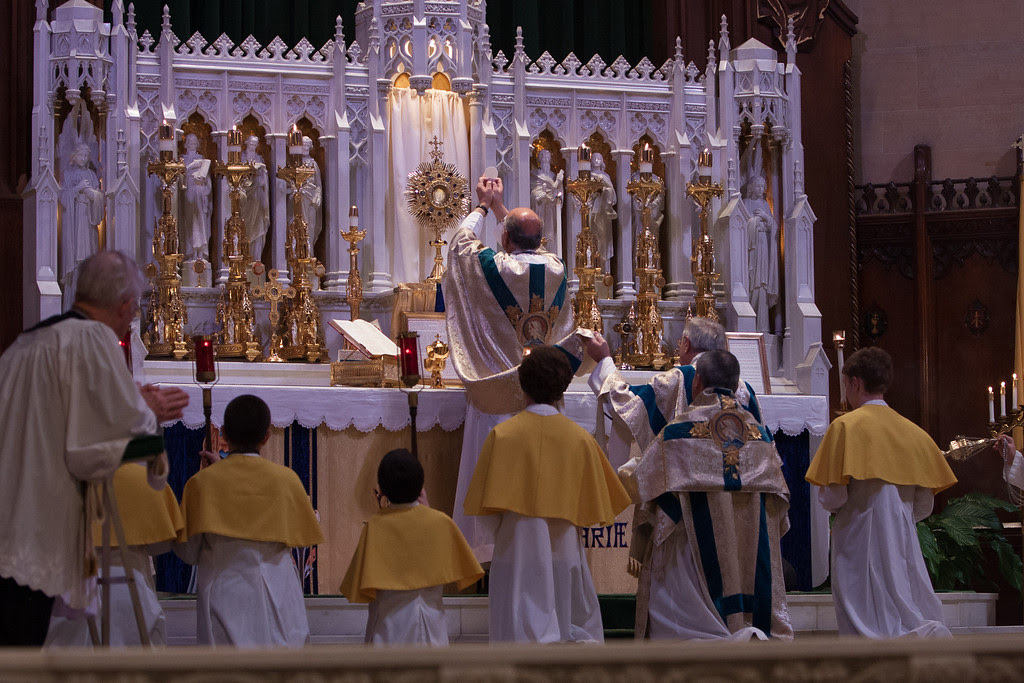 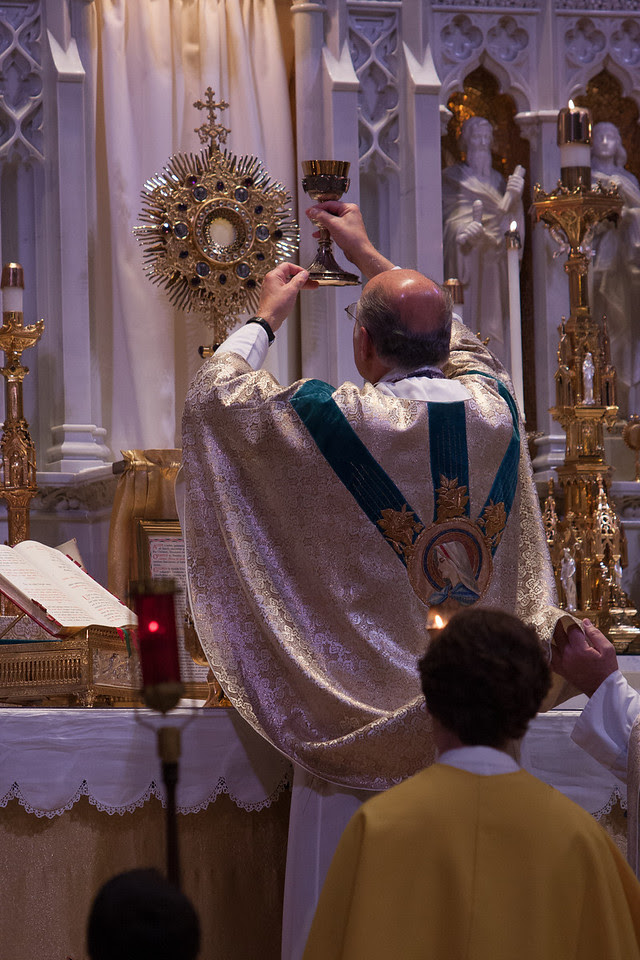 This is a version of the same photo at the top of the post.  When the celebrant consumes the Body and Blood of Our Lord, the deacon and subdeacon go out to the corners of the top step and bow in reverence.  This action has always reminded me of the sacredness of receiving Holy Communion. 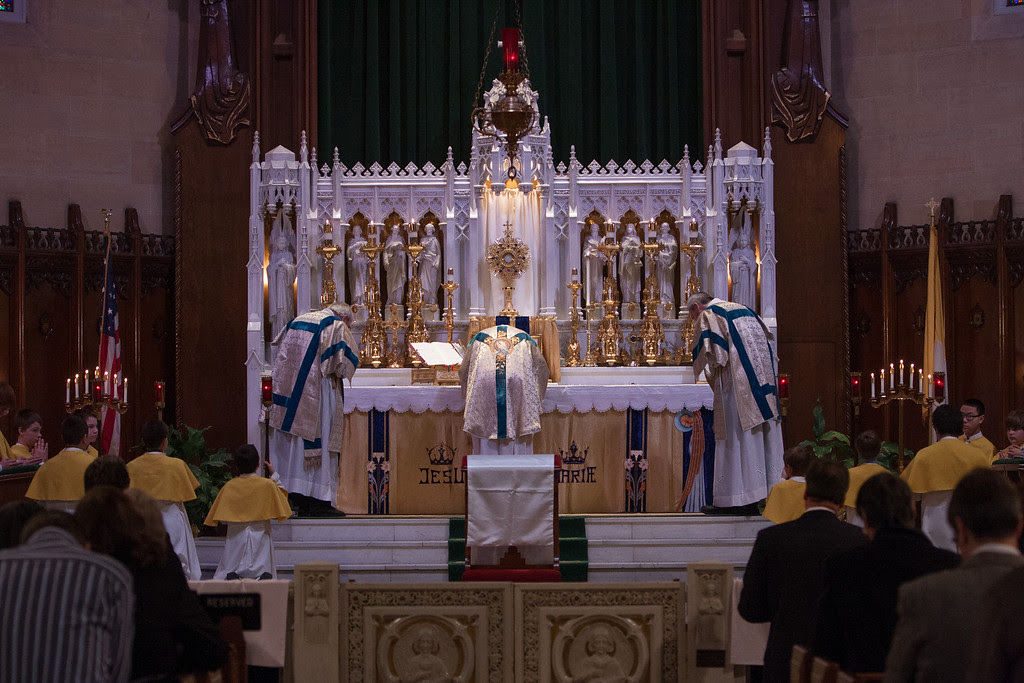 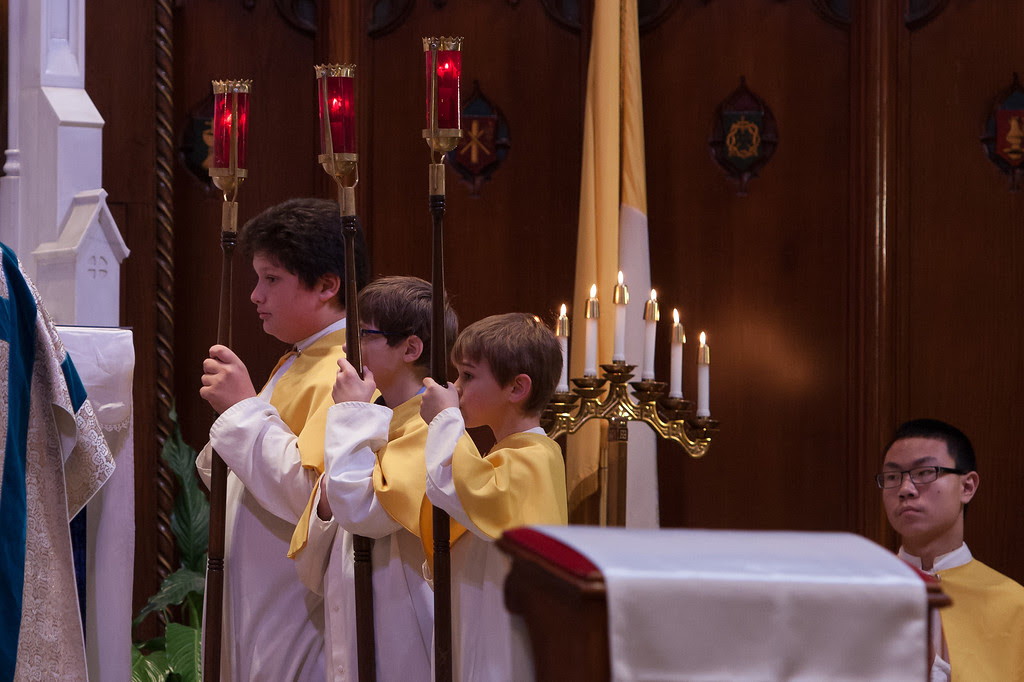 After Mass, this was taken during the Litany of the Saints. 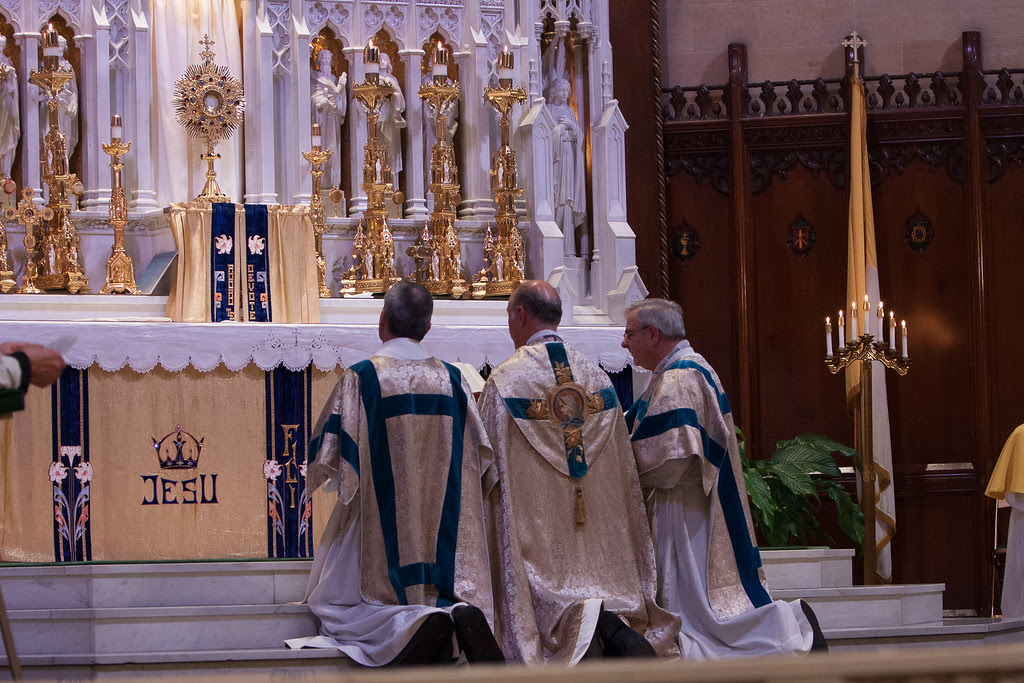 Finally, here is video of the Eucharistic Procession.  During his homily, Fr. Perrone asked the people to stay in their pews with their candles.  You will see a beautiful image as the procession comes out of the sanctuary as incense rises ahead of the Blessed Sacrament, then is met with the sun's rays.


More on 40 Hours
For interesting news items I don't have time to blog on, check out my Twitter Feed: @TeDeumBlog

Note: The recommended links below are automatically generated by the tool, so they are not necessarily related content.
Posted by Diane Korzeniewski at 10:12 PM