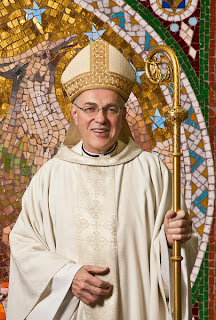 Tomorrow night, Friday, at Blessed Sacrament Cathedral, the Most Reverend Donald Hanchon, auxiliary bishop of Detroit, will celebrate Mass using the 1962 Missal for Juventutem Michigan.  The Mass is open to all, but those 35 and under may want to join this great group of young people for the social afterwards.  Juventutem is an apostolate for young people who are devoted to the traditional Latin Mass.  It may be the first time since the 1960's that the usus antiquior is celebrated the Detroit cathedral.  Here is the updated announcement from Juventutem:


The young adults of Juventutem Michigan are happy to announce that Bp. Donald Hanchon will celebrate a Traditional Latin Mass at the Cathedral of the Most Blessed Sacrament on Friday night, August 30, 2013, the Feast of St. Rose of Lima*, at 7:00 p.m. The Mass will be celebrated by a young priest of the Archdiocese and will be musically assisted by a choir under the direction of Joseph Balistreri, the Diocesan Director of Music. Anyone may attend the Cathedral Mass.

Archbishop Allen Vigneron and Msgr. Mike LeFevre blessed the organizing of this Mass.

7:00 p.m. Mass will be preceded by a 6:30 Rosary, at which members will pray for an increased acceptance of vocations to the priesthood and religious life. After Mass, clerics and young adults (18-35 years old), singles and families, will gather for dinner, fine conversation, in the cathedral dining hall.

The Mass is, of course, open to all ages and it is hoped that many of all ages will come.

The name "Juventutem" itself is the Latin word for "youth" and it appears in the opening prayers of the Traditional Latin Mass.

Note: The recommended links below are automatically generated by the tool, so they are not necessarily related content.
Posted by Diane Korzeniewski at 6:58 AM