Audio: Talk 1 of the "Theology of the Papacy" at Assumption Grotto 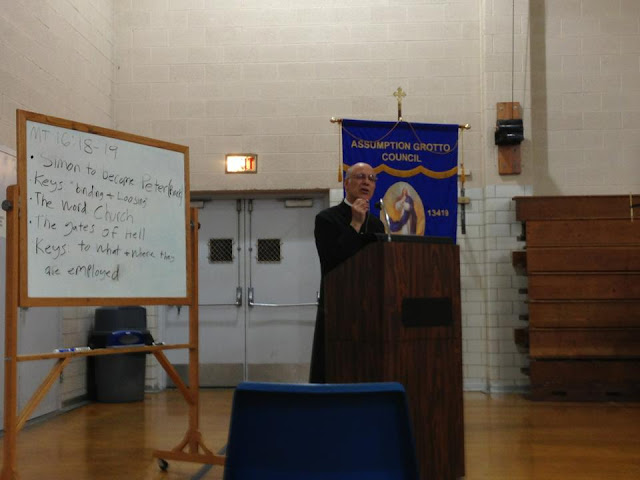 Last night, Fr. Perrone kicked off the first of a three-part series of discussions on, "The Theology of the Papacy."  It took place at the Assumption Grotto Knights of Columbus Fish Fry (Council 13419).  The next two talks will be on consecutive Fridays with the next one by Fr. John Bustamante and the last one by one of the Canons of the Holy Cross.  It is expected that people will purchase a dinner. Proceeds help the parish.

The dinner runs from 4-7, but the talk took place shortly after 6:00.  Many were showing up just as the talk was about to get under way and more tables had to be pulled out.  It was quite an impressive showing.  One count was at 115, but it seemed like there was more than that with each table holding 8-10 and not many with fewer than that seated.  I've not seen it that crowded, even when we had our Monastic Suppers for Lent in previous years.  Those featured a talk each Friday by Fr. Perrone.

We did not begin the Lenten season with planned talks, but with Pope Benedict stepping down and a Conclave coming up, Fr. Perrone thought it would be good to give people a brush up on the papacy.

Rick, our webmaster for the main Assumption Grotto website, recorded the talk with permission, and uploaded it.    I am hoping it will be archived later somewhere on the website.  Rick made it into MP3 format so people could download it and use it on MP3 players.  Go to AssumptionGrotto.com to find the audio. You can find it at the center of the home page if you scroll down where there is information about the talks. Blogger does not give me the ability to put audio here.

I offer a few more photos taken with my iPhone.  Quality is not the greatest, but it will suffice.  In this first photo, you see Fr. Perrone's mother listening to her son as she eats her baked fish.  Like all of us, she really enjoyed the talk. 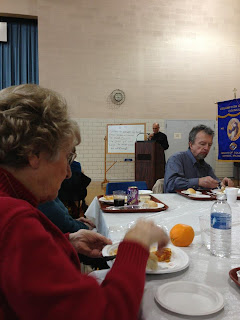 In the foreground are the canons of the Holy Cross, a brother, and the sisters. 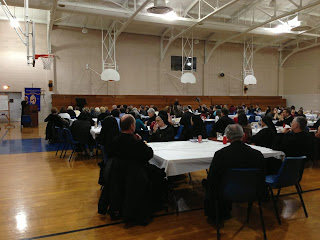 Another shot of the crowd just as it was getting started. You see the line for fish in the background.  After this pic was taken even more people piled in.  The baked fish seemed to be more popular than the fried.  It was very good. 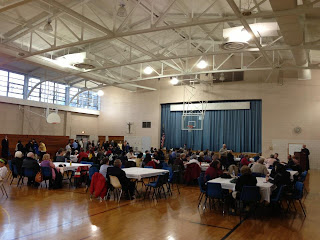 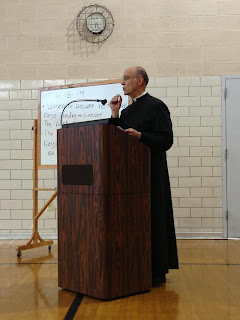 Following the talk, most went over to the parish church for the Stations of the Cross at 7:00 PM, followed by the Friday night TLM.  Fr. Perrone does the Stations first to allow people more time for the pre-Mass fast.

It's things like this that make me love Assumption Grotto so much.  People there love conferences and talks about the church and the faith.

Note: The recommended links below are automatically generated by the tool, so they are not necessarily related content.
Posted by Diane Korzeniewski at 6:01 AM