Report: Medjugorje Commission report due the end of this month... 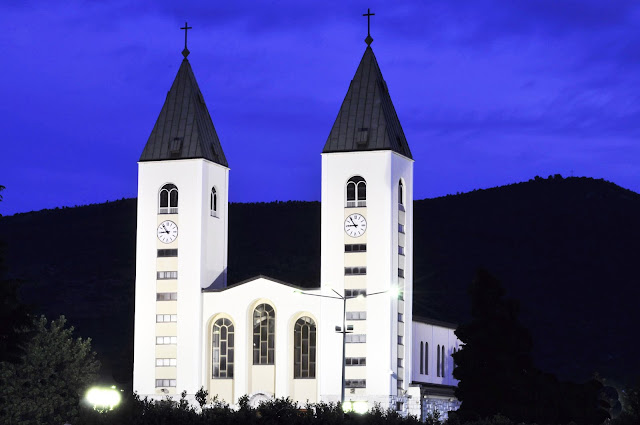 UPDATE: Yesterday, Edward Pentin reported, in the National Catholic Register, that Fr. Federico Lombardi, Vatican spokesman, stated it is not imminent and that the commission's report must spend some time at the Congregation for the Doctrine of the Faith.

A Vatican commission studying the alleged apparitions at Medjugorje will release its findings by the end of this year, a French magazine has reported.

La Vie says that the Vatican commission, established by Pope Benedict XVI and chaired by Cardinal Camillo Ruini, will present its report to the Pontiff by the end of December. The French magazine did not cite any authority for its story, but in February an Italian publication made the same report. That earlier report quoted Cardinal Vinko Puljic of Sarajevo as saying that “we need to finish this year.”


Read the rest on Medjugorje Commission at Catholic Culture along with links.

When it says the report will be presented to the Pontiff, that doesn't necessarily mean the Holy Father will issue a statement this year.  However, if the report does go to the Holy Father by years end, it will not be long before he speaks.  The question is, would it be more like January or say, in March, or later? The date chosen by the Holy Father always has significance.  I have long suspected, as I'm sure many of you have, that it will come on a Marian feast day of some kind, be that the Mother of God or the Annunciation, or other.  I always thought it would be great to have it on the day that the Church celebrates the Blessed Virgin Mary's birthday: September 8th (but I would not want to wait that long if the Pope would reveal his thoughts publicly, sooner).  Many in the Medjugorje movement have been celebrating it on August 5th:

September 8 can be viewed as Our Lady’s ‘official’ birthday celebrated by the Church. But for followers of Our Lady’s messages from Medjugorje there is another date in the calendar put aside for celebrating the Gospa’s birthday – August 5, best considered as Our Lady’s ‘private’ birthday. This was revealed to the visionaries very early on in the history of the Medjugorje apparitions.

• Mention of this date was also made by Fr René Laurentin and published the same year in his book, Is the Virgin Mary Appearing at Medjugorje? He wrote:

At the end of May 1984, Jelena and Mirjana, with whom I spoke on June 10, had received from the Virgin a call to celebrate August 5 as the 2,000 birthday of her birth. The feast was to be celebrated by two days of fasting and a day of celebration... The three days of fast (they added one) ended in a day of intense prayer in the Church and on the hill (of apparitions). There were many conversions and confessions. One of the priests said to me: “I will remember this day more than my 20 previous years as a confessor.” According to the young people (the visionaries), Mary had said who had heard confessions that day would have great joy...


Some may not see the significance of such a seemingly innocent thing - that the Blessed Virgin Mary would call for her birthday to be celebrated on a day other than the one celebrated liturgically by the whole Church.  This sets up a conflict for theologians discerning the alleged apparition.  The diocese of Mostar-Duvno, when discussing Tomislav Vlasic in the context of Medjugorje said this:

On 22 August 1984, Fr. Vlašić wrote to Bishop Žanić informing him that the Madonna’s 2000th birthday was to be held that same year on 5 August! No important ecclesiastic person took this news seriously and neither did Bishop Žanić nor the Holy See. However, during 1984, on 4 and 5 August, a large group of people gathered in Medjugorje to “celebrate” the Madonna’s “birthday”.

The bottom line is that the bishop could not authorize a change in dates for something that is on the universal liturgical calendar.  It's hard to fathom that Mary would ask for such a thing.  The Church looks for harmony in Church teaching and liturgical matters out of messages from alleged apparitions. It is clearly lacking in this case. When the people follow, against the Church, in observing a day not recognized by the Church, that is all the more significant.

Regardless of what side of the issue one is on, we should all desire that truth prevail.  There is nothing wrong with hoping for a positive outcome. I personally do not feel this is likely using basic reason.  No apparition has been approved while ongoing, but many have been condemned as not supernatural while ongoing.

The Church does not approve things happening now because tomorrow something could happen that would prove the thing false and ruin her credibility on such things. The fact that a decision is coming, says something with regards to timing and the fact that the alleged apparitions continue.

There is always the chance that the Holy Father could maintain the status quo, but offer further clarification and guidelines on things like pilgrimages.  However, I am doubtful of this only because it seems unlikely to go through several years of commission work just to maintain status quo. Moreover, Pope Benedict XVI is a co-worker of truth, and a man who has proven time and again, he will not avoid doing right by truth even in the face of potential adverse consequences.  We saw this with the Maciel case.

The case of Medjugorje could have a greater impact than that of Maciel, if Pope Benedict says nothing supernatural is happening, only by the sheer volume of supporters.  I think that is why he is so careful in taking his time since the commission began and why we need to patient a little while longer.  For example, if there is no support for authenticity after a long look at details (not just good fruits, but bad fruits, and how specific events stack up against sound theology), the Pope not only needs to speak the truth, but he needs to do so in a way that will keep as many followers as possible within the fold.  For this reason, we must all be patient and pray.  I trust the Holy Father on this.

I know, personally, many followers of Medjugorje and most of them know my position which I share with the local bishop of Mostar.  I will say this much about those people: They are some of the most faithful Catholics I have met in many respects.  Most of them go to daily Mass, or when they can; they pray the Rosary daily; they spend time in Adoration (and are responsible to some extent for many Adoration chapels around the US); they value Confession and use it frequently; and, they love the Church, her teachings, and the Holy Father.  I believe most will accept the judgment of Pope Benedict XVI.  But, I am aware of some who have expressed online that their belief in the "Gospa of Medjugorje" comes before anything the Pope has to say, if it is not positive.  Sadly, if even 1% reject a possible negative decision, or a fraction of 1%, that is a big number given the millions with an attachment or following to Medjugorje.

Attachment is a key word here.  My father gave me some cogent advice as a child when he was duped by private revelations that would later prove false.  Don't become attached to any such phenomena until the Church gives a definitive judgment. It's okay to be hopeful, but very cautious. Becoming attached sets us up to reject the judgment of the Church and that is why the Angel of Darkness will tolerate people engaging in pious practices, vocations and the like.  In the end, Satan hopes people reject the Church's judgment, ultimately putting them in a position to interiorly join him in saying, "non serviam." Discernment isn't just about good fruits, it's about the full package, most especially those connected to actual events.  One can find all over the web contrasting views of events, some by well known theologians.  In the end, the Holy Father is the final arbiter and the theologian who matters most.

So, pray.  Pray that we all accept the judgment of the Holy Father.  Despite my disbelief about authenticity, I am willing to open myself to any and all new information and thoughts Pope Benedict XVI may offer on Medjugorje.

Note: The recommended links below are automatically generated by the tool, so they are not necessarily related content.
Posted by Diane Korzeniewski at 7:41 AM