Archbishop Chaput: "Renewal begins not in vilifying others..." 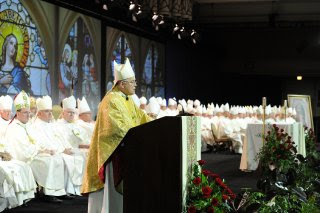 An excellent homily by Archbishop Chaput given this morning at the opening Mass for the Knights of Columbus convention taking place in Denver right now.  It is brought to us in full by the Salt + Light blog.  It's a worthy read, and one that invites reflection.    Read slowly and carefully.

The dynamic in Family of Moses is not so different from the dynamic in the family of today’s Church. God has chosen to lead his people. Miriam and Aaron, the sister and brother of Moses, resent his taking a Cushite wife. But the disputed marriage is merely a pretext for the siblings. What they really resent is Moses’ elevation above themselves, his special relationship with God. Moses if very much a flawed human being. By this point in scripture he may be “meek,” but he is not without sin. Nonetheless he is chosen by God. Therefore, Miriam’s and Aaron’s criticism – which flows out of their own rebellious pride – is really a criticism of God himself. Miriam, as the instigator, is struck with leprosy, but at least there is a kind of negative dignity to her own willfulness. Aaron is almost worse: a portrait of male spinelessness. This is the man who went along with the Golden Calf. Now he goes along with Miriam, and when Miriam is punished, he becomes obsequious with Moses.


Something similar can be said about conflicts in the modern church. Bishops, priests, and deacons are too often weak and sinful. They need to be held to high standards. Some deserve to be chastised. The clergy’s leadership in the Church should always be marked by humility and service, and never by a sense of entitlement. But men and women didn’t found the Church, they don’t own her; and they have no license to reinvent her. The Church belongs to Jesus Christ, and the different roles with the Christian community – clergy, laity, and religious life – have equal dignity but different purposes. Sin and failure, including by the clergy, need to be named. But when people deride their bishops and priests out of pride and resentment or some perverse desire for they perceive as “power,” they undermine the Church herself, and they set themselves against the God whose vessel she is. And that, as Scripture suggests, leads in a painful direction.


All real reform in the Church requires two things. Today’s Responsorial Psalm – Psalm 51 – gives us the first thing. We find it in the lines “Purge me with hyssop, and I shall be clean; wash me, and I will be whiter than snow;” and “Create in me a clean heart, O God, and put a new and right spirit within me.” Renewal begins not in vilifying others, but in examining ourselves honestly, repenting of our sins and changing ourselves. This applies to every baptized person, from the Pope to the average man or woman earning a wage. We are all sinners. We are all in need of repentance and God’s mercy. When we really understand that, we can speak to each other with both honesty and love, and restoring the mission of the Church can begin.


Today’s Gospel gives us the second thing needed for any lasting reform: faith. Not faith as theology, or faith as a collection of doctrines and practices; but faith as a single-minded confidence in God; faith as the humility – and in a sense, the imprudence, the passion, the recklessness – to give ourselves entirely to Jesus Christ. That kind of faith changes people. That kind of faith shifts the world on its axis, because nothing can stand against it. As long as Peter keeps his eyes and his heart fixed on Jesus Christ, he can do the impossible – he can walk on the water. The moment he gives in to doubt and fear, he begins to sink. So it is with our personal faith, and so it is with life and the health of the Church.


In light of our Gospel reading, it’s fitting that our Mass today commemorates the French priests and saint from the 19th century, Peter Eymand. Eymand was a friend of Sts. Peter Chanel and Jean-Mare Vianney, and the founder of the Congregation of the Blessed Sacrament. He was an intriguing man. The great French sculptor, Auguste Rodin, once entered Eymand’s congregation as a lay brother, having given up art after the death of his sister. Eymand served as Rodin’s spiritual spiritual counsellor, and eventually sent him back to his work in the world as a sculptor, because he believed that Rodin glorified God more truly through the beauty of his art. The focus of Eymand’s life was an intense love of Jesus Christ in the Blessed Sacrament. He was tireless in preaching a deep devotion to the Eucharist as a key to re-igniting the vocation of Christians in the world. The Church honours him as “the Apostle of the Eucharist,” and his most famous line is worth remembering. When he decided to leave the diocesan clergy to become a religious priest, his sisters begged him to wait and reflect just a little longer before he acted – even just one more day. He answered, “God calls me now. Tomorrow will be too late.” God is calling each of us here today – clergy, lay, and religious – to love him with all our hearts and to renew the life of his Church. God is calling us now. Tomorrow will be too late. So let’s pray for each other, and support each other – and begin.

More info about the convention can be found here and S + L live broadcast schedule here.


The obedient are not held captive by Holy Mother Church; it is the disobedient who are held captive by the world!
Note: The recommended links below are automatically generated by the tool, so they are not necessarily related content.
Posted by Diane Korzeniewski at 10:31 PM