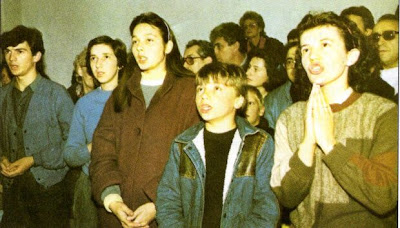 The Diocese of Mostar-Duvno has released a report in English concerning medical and scientific studies performed on the visionaries of Medjugorje.  While it was given in 1986, I believe this may be the first time we are seeing it in English.

When googling the subject, the search list turns up quite a bit of positive information about such testing of the visionaries.  The Holy See, which currently has an international commission studying the phenomena, has such positive studies, but also those of a critical nature like the one from which we are seeing excerpts below.  Those interested in the phenomena might want to be aware of it as we wait for the Congregation for the Doctrine of the Faith to convey the answer to the question of Medjugorje.

It is important to note that the International Medical Association of Lourdes will sometimes study cases sent by bishops who are discerning other phenomena.  Many can claim a cure, and some may be truly miraculous, but few can be proven as miraculous because of the rigorous standard that must be used.  Some alleged cures of certain conditions or diseases do not really qualify for further study because of the potential for lengthy remission, for example. On the other hand, when several MRI's document a growing tumor, then it suddenly disappears and is no longer traceable following an event or prayer; or when a blind person suddenly regains vision, it is easy to document.  Such a case is still scrutinized to rule out other possible explanations for the cure.

The excerpts released here concern the testing of visionaries themselves.


THE SCIENTIFIC TESTS ON THE MEDJUGORJE SEERS: A CRITICAL STUDY BY PROF. THEOPHILE KAMMERER, PRESIDENT OF THE LOURDES INTERNATIONAL MEDICAL COMMITTEE (1986)
KIUM, 2011-06-10

Prof. Henri Joyeux and Father René Laurentin (both French), in collaboration with some other professors and doctors, published in 1985 the book „Etudes médicales et scientifiques sur les apparitions de Medjugorje“, published by O.E.I.L. (Medical and Scientific Studies On the Apparitions At Medjugorje". The work has been translated and published in Croatian, too, (Duvno 1986). A critical look at this work was addressed by a member of the enlarged Diocesan Commission (1984-1986), Father Nikola Bulat, in his study on the phenomenon of Medjugorje Istina će vas osloboditi, Nepouzdanost izvora i nedoličnost poruka. Studija o nekim međugorskim pitanjima ["The Truth Shall Set You Free. The Unreliability Of the Sources And the Indecency Of the Messages. A Study On Some Issues Of Medjugorje”] (1986), Mostar 2006, pp. 96-98.


A few months after the exams conducted by Dr. Joyeux, further medical tests were carried out by an Italian group, led by Dr. Luigi Frigerio, in 1985.


Prof. Théophile Kammerer, then President of the International Medical Committee of Lourdes, after having studied the French dossier and having known the results obtained by the Italian group (through the report of Dr Cherubino Trabucchi), presented his criticisms in a meeting of the Committee in 1986.


We asked Mrs. Pascale Leroy-Castillo, Director for Archives and Heritage of the Sanctuary of Our Lady of Lourdes, to send us a transcript of the conference. She replied on May 13, 2011, with the consent of Dr. Alessandro de Franciscis, head of the Lourdes Medical Bureau, that publication of the contents of the conference of Prof. Kammerer is allowed, stating that it was held at the meeting of that Committee in September 1986. Also on this occasion, we sincerely thank the officials of the International Medical Committee and of Archives and Heritage of the Shrine of Our Lady of Lourdes for their kind permission. Here are some passages from the exposition of Prof. Kammerer.

*Go read the excerpts from the 1986 report concerning scientific testing of Medjugorje visionaries the Diocese of Mostar-Duvno website...


Further reading about medical and scientific testing of Medjugorje visionaries:


The obedient are not held captive by Holy Mother Church; it is the disobedient who are held captive by the world!
Note: The recommended links below are automatically generated by the tool, so they are not necessarily related content.
Posted by Diane Korzeniewski at 5:30 AM