﻿
﻿
At the end of November this year, Dr. Alice von Hildebrand released an article called, Revelation and Curiosity at Catholic News Agency . I decided to wait to draw attention to it since it came out as "Thanksgiving weekend" concluded.  It is preceded by this:


Editor's note: Dr. Alice von Hildebrand adds to the debate with Christopher West over Theology of the Body. She addresses his words that Mary ejected a bloody placenta after she gave birth to Jesus

This isn't just about the Here is one excerpt from her short piece which I recommend reading in full:


This "harmless" and understandable curiosity rampant today (after all, is one not entitled to ask questions?) can have another serious consequence. Revelation being silent on certain issues, the impatient questioner, eager to find an answer at all cost, might, unwittingly, be tempted to become "creative" and will fall from the supernatural to the purely natural. 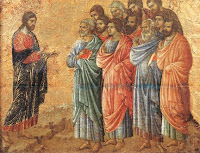 Alice von Hildebrand’s recent article entitled “Revelation and Curiosity” goes a long way to place the debate over the true meaning of modesty in the larger context of philosophical and theological thought. She highlights the basic distinction between supernature (God and the order of grace) and nature. The precise character of that distinction has always been essential to theological discourse, and the relation between grace and nature has often been the subject of unfettered speculation, to the detriment of the faith. (See, for example, Pelagianism and Jansenism.)

Father's piece goes even deeper, taking a closer look at faith and reason, apologetics, theology, and catechetics first.  He then comes back to discuss chastity, the claim about Mary's bleeding placenta, and the Perpetual Virginity of Mary in greater detail.

While the comment box is open here, I suggest leaving comments at the respective sources.  There is already a bit of dialogue at Fr. Angelo's blogpost.

The obedient are not held captive by Holy Mother Church; it is the disobedient who are held captive by the world!
Note: The recommended links below are automatically generated by the tool, so they are not necessarily related content.


Editor's note: Dr. Alice von Hildebrand adds to the debate with Christopher West over Theology of the Body. She addresses his words that Mary ejected a bloody placenta after she gave birth to Jesus

Posted by Diane Korzeniewski at 9:59 PM