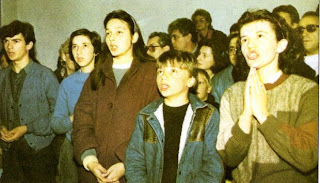 Back in my post of June 13, I told you about Louis Bélanger, now retired from the University of Montreal, who studied the case of Medjugorje from a scientific point of view back in the early days.  Bélanger makes his second post at his new website, "Medjupedia".  I'll start you out here for the first part of his entry. Then you can follow the link to his post.  He goes into great detail using data such as transcripts of audio, along with some of that audio, but not before discussing where it is coming from, and whether it is reliable to use.

Medjugorje: The Grand Concealment – 1) The Facts


The end of the “apparitions” announced by the Lady of Medjugorje has raised one of the most, if not the most important objection that has hindered the recognition of their supernatural character.


According to the visionaries’ tape recorded declarations, the Gospa – the Croatian word meaning the Madona or the Virgin Mary – announced, on June 30, 1981, that she would appear to them three more times. On July 3, ten days after the beginning of the happenings, the visionaries confirmed, before five adults, three of whom were priests, that their meetings with the Gospa were once and for all over.


Twenty-nine years later, in 2010, the daily encounters of some of the visionaries with the Gospa continue to attract millions of pilgrims. What has happened?


In this editorial post on the historical grand concealment, we will try to establish the facts that constitute the solid basis of that troubling cover-up.

Then, in the next editorial post on the actual duplicity, we will identify the manoeuvers deployed by informers and key protagonists to conceal those informations that were interpreted as a threat to “the good cause”.

In this latest post there are transcripts and audio, probably not heard before other than by those who had access to the tapes.  In the audio you will hear the voices of some of the visionaries, as well as that of fra Jozo Zovko. There is a translation of the transcript right below the audio.  Since I do understand some Croatian I was able to follow along.  It is clear that the visionaries said on that day, that the "gospa" would appear "three more times".
The interesting thing to note is that the entity of Medjugorje has appeared more than 40,000 more times over the past 28 years, and within days to be 29.  Is it possible that, if this were the Blessed Virgin Mary appearing to them, that she would not know then, that she would appear over 40,000 times and counting for the next 29+ years?
Continue reading:  Medjugorje: The Grand Concealment – 1) The Facts  - [français]

I'm going to close comments at this box. I think discussion should take place at the blog of Louis Bélanger, who is engaging in dialogue in his posts, as time allows.