Note: This post has been edited at the bottom to include a link which has the 9 minute segment isolated.

I listened to the Friday edition of EWTN's Open Line with Colin Donovan, the VP of Theology at the network on May 21, 2010.  The audio is now available online.
Every now and then callers will ask about apparitions, most often referring to Medjugorje.  I am only going to give you a few quotes and a lead in, leaving Colin to explain most of this through the audio.  I am leaving out some key things so that you can hear it from him.
This audio could get moved on Monday as a new show is uploaded.  I will probably have to change the URL, so if you are looking for the audio and do not find the right one (May 21, 2010), then drop a note in the combox and I'll update it from the archives.
In this two hour segment, if you slide the bar to 1 hour 28 minutes, the question will come in about with all the sin in the world, can one follow apparitions in these times if they find them compatible with the Gospel, and see nothing contrary to their own "faith and reason".   The woman begins by using Catherine Laboure as an example.  She also talks about how the people followed the children of Fatima before it was approved, and asks the question: How would there have been a "miracle of the sun" if no one had followed Fatima before approval? Colin gives a solid answer. 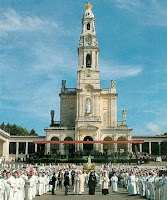 He then discusses his thoughts on whether apparitions are happening "in these times".   He talks about holiness of the visionaries using Fatima and Lourdes as examples.   Further dialogue with the woman then prompts him to explain the difference between a mystic and a visionary, which was good because these two things do get confused.
As the discussion progressed, and the woman pressed, still not mentioning Medjugorje, Colin admonished listeners to "keep their ear to the ground and listen to the Church and what she is saying about things because when she says 'no', we better say, 'no' because the Church will be right 99.9% of the times....and we will be wrong".

He then goes deeper into details of Fatima and it's approval, that it was headed in the direction of approval from the beginning because it was credible, was not opposed by Church authority, the children were humble and behaved as you would expect. He noted that it was approved just 13 years later.
That's when the woman finally brings up Medjugorje.  She pointed out that Mother Angelica talked about Medjugorje in a positive light.  How did Colin respond?  You'll have to listen to find out.
Click here to begin the MP3 audio and use the slider bar to go to 1:28