Below is my original post on McGivney.  The musical began last night with it's first performance.   However, call (248) 302-9471 or mcgivneytickets@gmail.com  to find out for certain if you were planning on attending on that day.

The last two performances are Saturday and  Sunday, December 12th and 13th.


An original musical production based on the life of Fr. McGivney - the founder of the Knights of Columbus will begin on December 6th at Assumption Grotto in the old school gym. It will feature an orchestra (which includes members of the Detroit Symphony Orchesra and the Assumption Grotto Choir). The music was composed and will be directed by Grotto's Pastor, Rev. Eduard Perrone. It is produced and directed by Grotto parishioner, Joe Maher.

Other dates are December 8th, 12th, and 13th. These musicals are usually limited to the stated performance so get your tickets now.  Please consider attending one of the earlier performances where attendance is somewhat lower.  On the last day, be prepared for parking and seating challenges, so get there very early.


See the write up in the Michigan Catholic. 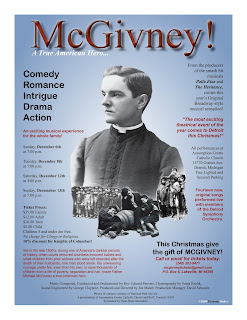 Posted by Diane Korzeniewski at 6:00 AM