Grotto's pastor, in a very thought-provoking sermon at the 9:30am extraordinary form Mass, talked about humility, modest, and pride. Here is the sermon of Fr. Eduard Perrone for the 10th Sunday after Pentecost, 2009 (extraordinary form). The Gospel was Luke 18:9-14. 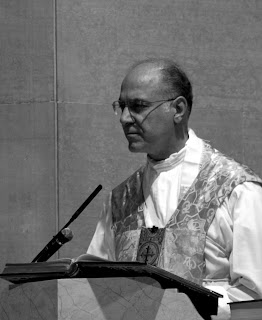 This Gospel tale of the two men praying may have met some particular need at the time it was spoken. Indeed, the Old Testament Law made much of one’s being righteous according to his works, which could then become the occasion of pride over one’s successes. The parable is a striking lesson in humility, in dependence upon the grace of God for justification (although goods works are necessary as well), and in having a sincere contrition for one’s sins.

When we were young, we did not use the word ‘humility’. I suppose this was because it was too big a word for youngsters. But we did use another word for it, a good word which is telling, expressive of a wider, more comprehensive virtue. We called it modesty. If someone didn’t praise himself, talk about himself or his deeds, we used to say that he was ‘modest,’ rather than humble. This word modest recognizes a fundamental disorder that we have ‘naturally’ (that is, in our fallen condition) whereby we have impulses, drives towards self-assertion and self-promotion that manifest themselves in a variety of ways: a cocky attitude, the lewd flaunting of one’s body, those all-too easily hurt or angry feelings, self-reliance, thinking oneself to be ‘special’ in some way or deserving of preferential treatment over others due either to some personal gifts or to some entitlement on account of lacking them.

There is a certain elusiveness about this virtue that makes it hard to grasp it and difficult to analyze. Speaking of it too much is already dangerously near to transgressing it. Examining it too closely is like the attempt of peeling away the petals of a rose to investigate the cause of its beauty: the thing’s destroyed in the process. Yet for all its fragility, humility is a tough virtue. It can only be found in the spiritually advanced. It’s not a virtue of the beginner, but rather of the proficient.

Humility is among the most difficult things to sermonize about. I want today to make some remarks about the ways humility (or its opposite) manifests itself rather than to attempt an analytical treatment about it.

One of the signs of a humble person is his readiness to learn from others. Without humility, one can’t learn a thing from someone else. Another sign is his admission of what he owes to others for what he has accomplished or achieved. These indicators point to the dictum that ‘humility is truth.’ It is not so much how low a man bends or appears obsequious in his conduct (that could be mere artifice) that shows humility. A meditation on the fact that we come into this world as nobodies and that we leave it bereft of all the ‘props’ of position, possessions and persons ought to lead us to pursue real humility.

Another thing that should occur to anyone who puts his mind to this subject is the fact that, no matter how things may appear, there is at least one good quality in anybody else but me that I lack or that exceeds the same in me. Although there are people who are highly gifted in many ways and others of seemingly few talents, yet there is a certain leveling in the sense that God apportions His gifts unequally, in such a way that no one has it all and that anybody may have some good thing that I lack, at least somewhat. Of course, this realization can make one envious–a kind of insecurity, as they say–which manifests pride. Being grateful to God not only for what I have but also for what He has given others that I lack is a spiritually healthy and humble outlook.

The best definition of humility I was ever told was this: humility is ordinariness. At first hearing, this is a shocker–first, because we often think that humility is a kind of shyness (again, that modesty I spoke of) and second because we are always bid to excel, to be discontented with ourselves, to achieve any heights of success that ambition may propose to us (which is surely a false and frustrating aspiration). This ‘ordinariness,’ the endeavor to be ‘just like everybody else’ does not mean to imitate some low common standard of goodness or under-achievement. It means rather that we ought not to try to appear better or greater than others but to hide ourselves and use our gifts for their God-given purposes, without any display of self-aggrandizement. This goal is not inconsistent with what our Lord commanded when He said that we should ‘let our light so shine before men that they may see our good works.’ This kind of showing-off (so to speak) is for God to get the credit and not ourselves: a completely different motivation and effect of our actions.

A sure measure of knowing how lacking in humility we are is our reaction the moment we are opposed or criticized. If the response is either anger at the insult, or it’s alternative, hurt feelings, we know that pride, self-love, has been wounded. Although there are challenging and sometimes embarrassing moments we may have to face, these can be of great profit if we accept them as opportunities to grow in humility and self-control, and to exercise that toughness of spirit we call fortitude.

One final thing concerns something our Lord once said. He never pointed to any miracles of His and bid us to imitate them (which we could never do in any case), but He did say that we should learn from Him who is meek and humble of heart. The Sacred Heart of Jesus, the Heart of God, is surrounded by the thorns of humiliation, scorn and ridicule. What a lesson that is in humility!

Who, looking at the Sacred Heart of Jesus, can have a motive for being proud or for making any complaint for being unappreciated?

If any priests are reading, please know that we need to hear this kind of stuff from our pulpits.

N.B.: If you are in metro Detroit, be sure to come to Assumption Grotto on Assumption Day - August 15th, 2009. Archbishop Vigneron will have the evening 7:00pm Mass.