Since Call to Holiness 2007 was at two locations this year, we were fortunate to have more than one volunteer photographer working the sites. When I get photos from the St. Rene location, I will make posts featuring those. There will also be several more posts during the week of other speakers, which included Marcus Grodi, Dr. Alice von Hildebrand, Bishop Bruskewitz, Fr. Neil Roy, and Dr. Robert Fastiggi.

For those who could not make it, or were too far away to come, I will be posting info on how to get video, CD's or an MP3 CD of the talks.

This morning, I would like to share a few shots of Detroit Auxiliary Bishop, Daniel Flores, who recently came to us from Texas, and was ordained on November 29, 2006 by Cardinal Adam Maida.

What little I heard of the Bishop's homily was profound (I explain below an interesting side story for the day, which had me running a tad late for the Mass).

As I looked through the 300mm camera lens, I saw a man who was not reading a written homily, even though it appeared as such because he periodically looked down. Rather, he was in very deep reflection and he was conveying that reflection on the fly. He looked up; he looked down; he looked to the side - often pausing in between. His deep voice cut through the echo of the old Church, making his words very clear even with the 50% hereditary hearing loss I have in both ears. 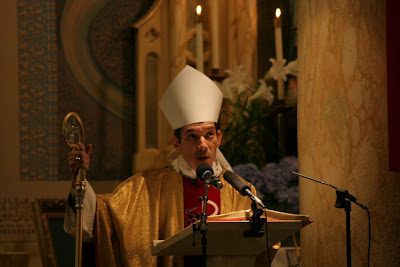 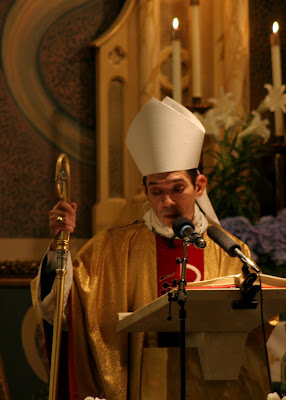 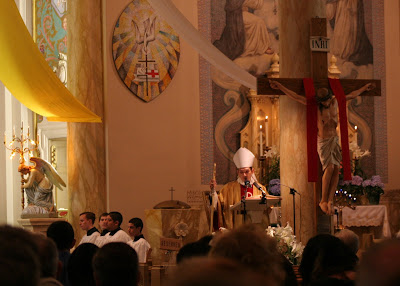 If anyone would like to offer their thoughts on the homily - from either site, or talk about key points, please feel free to do so in the combox.

I headed up to the balcony for the rest of Mass so that I would not disturb anyone during their worship. The environment was very dim - more dim than Assumption Grotto, but the natural lighting gave off a beautiful golden glow. The Paschal Candle in the center made it challenging and I went as far to the right as I could go.

Below, from left to right, we have the pastor of OLMC - Fr. Walter J. Ptak and behind him Deacon Richard Bloomfield, with Bishop Daniel Flores in the center. Perhaps someone can email me at TeDeumBlog@aol.com or make a note in the combox for the remaining two, whose names I do not know. I believe the fourth person is a priest of Miles Christi. 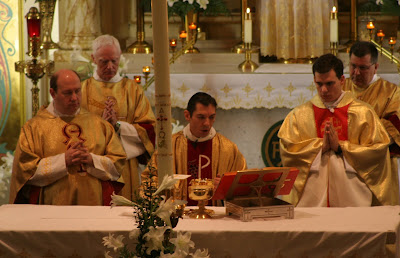 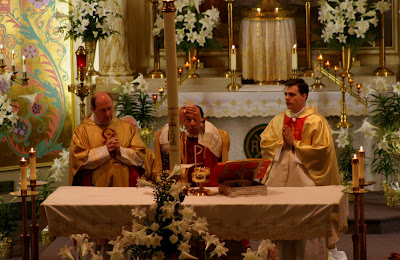 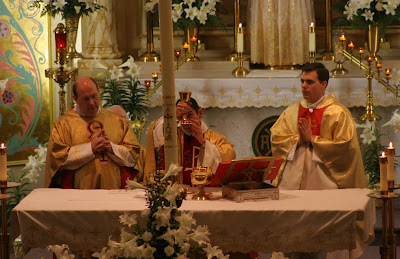 After Mass, the Bishop noted that it was the feast day of St. Louis de Montfort, who is responsible for the Total Consecration to Jesus through Mary

, which profoundly guided Pope John Paul II. Bishop Flores, the deacons and concelebrants, and the altar boys all knelt in the sanctuary before the Blessed Sacrament and led us through a renewal of the consecration prayer which was on the back cover of the CTH booklet. This photo taken during the consecration prayer is a little dark, but you get an idea of OLMC's beauty. 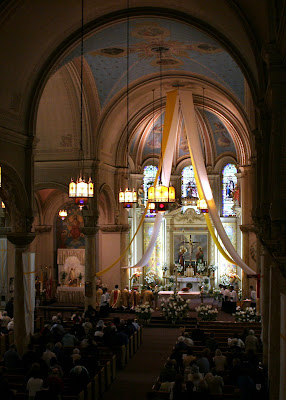 ERROR OF THE DAY - Doh!
I made the mistake of accidentally leaving at home (50 minutes away) a little 1-inch square piece which connects the camera to the tripod. As I set up my camera just minutes before the morning Mass at OLMC (Our Lady of Mt. Carmel - Wyandotte), I realized I was in BIG trouble. There is simply no way to take photos without flash in the dim lighting of a church without having the camera mounted (that is, without very expensive stabilizing lenses). I flew out the door (God bless the men who saved my parking space), and ran to a nearby Meier where I bought a new tripod. I made it back mid-homily and in time to get some shots off from the floor before heading up to the balcony for the rest of Mass.

ADDITIONAL CAMERA NOTES
I used the 400 ISO setting and kept playing with the exposure meter. The camera was mounted on a tripod that was a little different than my original one and, I found that it would shake for up to 10-15 seconds after I finished moving it. It was not robust. This accounts for some slight lack of clarity in some photos. In addition, most of the speakers were in constant motion. I had the aperature at the lowest setting for a given lens and strength and there was only so much I could do without a better stabilizer lens - as far as I know.

For further photostories of the 2007 CTH, and other Catholic discussions, visit the Te Deum homepage

Posted by Diane Korzeniewski at 6:49 AM