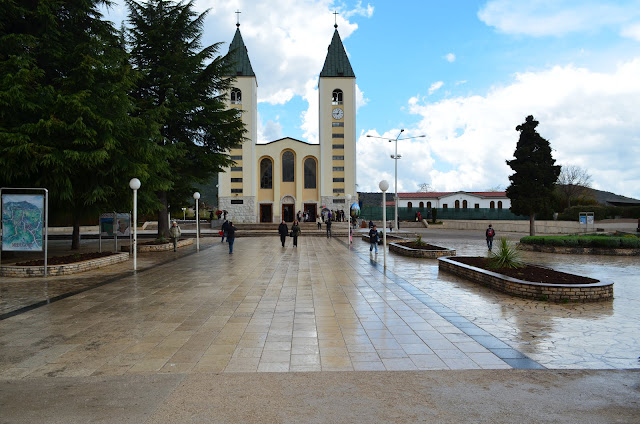 Some Background and Thoughts

It has a foreword by Mariologist, Rev. Manfred Hauke and the preface was written by Patrick Coffin.

I often get emails from people who are discerning whether to visit Medjugorje, or who feel conflicted.  When they search, they end up at the most popular sites at the top of the search list which offer an uncritical view of events in favor of signs, wonders, and good fruits.  This not only comes to the exclusion of bad fruits; it has blossomed into an alliance within the entire movement which pits the "gospa" of Medjugorje against the local bishops.

I pause any time I see anger directed at a disapproving local bishop when it concerns a private revelation or vision, especially since the Church does not require me to accept them; rather, I wait for explicit approval (and I embrace those approved).  This is the true sense of "wait-and-see." Absolutely no harm can come by waiting for such approval; but, if we become attached to a phenomenon before approval, we risk not being able to let go if the Church says: "No."  We are supposed to trust the Holy Spirit to guide the Church through the Pope and bishops, and by extension, official commissions and councils. This trust in Church discernment requires faith in God over faith in our own self-discernment. The involvement of the Angel of Darkness is manifest when many people reject a negative judgment by the Church; and, his end goal is clear: Division.

History shows us that those claiming visions will often undergo serious challenges from within, and out, of the Church.  In the end, their heroic virtue and submission, along with the docility of followers, serve as a positive sign for authenticity.  St. Faustina, and her followers, were good examples of this because nothing was done without the approval of the Church.   Her work began spreading globally in 1942, and was suppressed by the Holy See in 1959 due to what was later learned to be faulty translations that went to Rome.   In April of 1978, the writings were approved under the corrected translations, months before Blessed John Paul II became Pope.  Contrary to the many claims you will see on the web of a vast conspiracy over the writings of St. Faustina (mainly in promoting Medjugorje), no such thing existed. Sadly, the people running those sites have access to the same information as do I, but the facts do not conveniently fit into their narrative.

As I explained previously, an uncle of mine who was devoted to Divine Mercy told me the response of followers and of those producing the materials when they learned of the suppression, was remarkable. There was no anger, or outrage, and there were no protests.  They quietly accepted God's will, as it came through the Church.  God had a plan for Divine Mercy, but it was to wait until one of its greatest advocates was on a world stage.  While it is good to hope for such a thing with any private revelation, we must prepare ourselves to set it aside if disapproval in the form of a definitive judgment comes.  We must constantly examine our consciences over our attachments and ask ourselves how we would respond to a potential disapproval.  The Blessed Mother is real and she is always accessible.  Our devotion to her should never depend on any given private revelation, especially one that has not yet been deemed worthy of belief by the Church.

There is no doubt that there are good fruits among Medjugorje devotees; but, we must ask, what is the origin of the truly good fruits, like conversions and vocations? Do we attribute them to a vision, or consider the increased use of the Sacraments and development of a prayer life and deeper relationship with the Blessed Mother and Our Lord in the Eucharist?  If Medjugorje is declared "not supernatural", are those conversions and vocations somehow invalid?  Of course not, especially if they are rooted in the Sacraments and in growing an authentic relationship with Jesus and Mary.  Those whose spiritual lives revolved almost exclusively around the messages and visions, are at risk of being like the seed sown on rocky ground (Matthew 13:20-21).

A commission was initiated on March 17, 2010 to look at the events of Medjugorje and it was announced by Cardinal Puljic in February of this year, that it had to be completed before the end of 2012.  Consider that, when investigating something that began 30 years ago, the details can change over time as people repeat the story and it morphs into something different.   That is why tape recorded interviews with the visionaries, made soon after the alleged apparitions began, are of chief interest, and certainly, in the hands of the Commission.

What questions might be answered with those tapes: What did the young visionaries say in the early days when Fr. Jozo Zovko interviewed them? How does that compare to what they claim later, or today? Have parts of the narrative changed? What is in the primary resources used by proponents?  Was hard evidence and damaging information withheld from readers, or "doctored" in a way that would not raise suspicion with regards to authenticity?  If so, who altered texts, and what might be some possible motivations?  Some might wonder: Are translations of the tapes reliable?  Foley compares two sets of transcripts of those tapes.  One set of translations originates from The Hidden Side of Medjugorje by Fr. Ivo Sivrić, OFM (edited by Louis Bélanger).  Using these extensively for his analysis, Donal had permission from Louis to publish long excerpts.  The other set of translations comes from Daria Klanac, a Medjugorje devotee.  The analysis provided sheds some interesting light on what authors have written in pro-Medjugorje books.  The question is, can their versions of history be reconciled with any of the translations of interviews with the visionaries themselves?  Foley explores these very things in Medjugorje Revisited.

Donal begins the book by giving us a historical perspective of the region.  We get a glimpse into the culture - it's strengths, weaknesses, and rituals.   What do we learn about the culture in the centuries, decades, and days before the flashpoint?  Were manifestations of those things seen in the culture in the 21st Century? What are the potential influences? How has the Holy See and local Church dealt with cultural challenges that go back centuries? What happened in the years and months prior to that first purported vision?

Among other things explored, Foley looks closely at scientific testing.  How rigorous was this testing? Were scientists able to do all of the testing that they sought?  Were the visionaries cooperative in every sense, or did they put up obstacles?  Did the visionaries enable scientists to test them all simultaneously?  Donal explores not only the tests that were performed, but the kinds of tests that were not done, and why.

Cardinal Vinko Puljić, the metropolitan archbishop in Bosnia & Herzegovina, said the work of the commission would be done by the end of 2012, and that it would go to the Holy Father for his final judgment.  The months ahead will be a great opportunity to familiarize yourself with hard evidence that would have been in the hands of the Commission. Medjugorje Revisited is for everyone - those who believe in it's authenticity, disbelieve in it, and especially for fence sitters who would like to believe, but feel conflicted.  Anyone who has been made to feel uncomfortable or brow-beaten by devotees because they do not believe in the authenticity of the Medjugorje visions will be put at ease about exploring their reservations.  The book is detailed, objective, and written with compassion and love for truth - something which can never be sacrificed, even for all the conversions and vocations in the world.  People on all sides should want, more than approval or disapproval, the truth.


From personal experience, every time I met the Holy Father he had great interest in
the question of Medjugorje, a question to which he was directed from the very beginning
that he became prefect of the Congregation for the Doctrine of the Faith.
It deals with a question for which he feels responsible as the supreme head of the Church
to pronounce a clear message.
- Archbishop Alessandro D'Errico, Apostolic Nuncio to BiH, March 17, 2009


The obedient are not held captive by Holy Mother Church; it is the disobedient who are held captive by the world!
Note: The recommended links below are automatically generated by the tool, so they are not necessarily related content.
Posted by Diane Korzeniewski at 10:29 AM